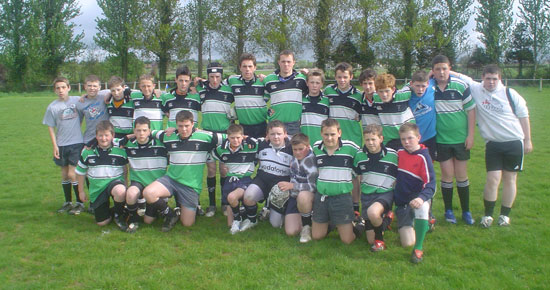 The season came to a close on Sunday last in Carrick-On-Suir for this formidable Clonmel U-14 team. Eight months of training and matches brought this team into the business end of the season and a place in the plate final against Waterpark. These teams met in the league in November 2006 and after a great game of Rugby it ended in an 8 – All draw. This team has grown and matured during the course of the season and Sundays’ performance was the finished project.

On a cloudy warm day on a lovely grass covered pitch the game kicked off at 10 a.m. An early start and Clonmel were out of the traps from the kick off and had Waterpark defending their line. Continuous pressure from Clonmel saw Thomas Donnelly slip over for a well taken try which was converted by Ross Mullane. From the restart Clonmel gathered the ball and attacked Waterpark up the middle of the pitch. Great support play and nice handling saw Jack Doyle power over in the corner for a try which we didn’t convert. 12 – 0 to Clonmel and the next score was vital to the outcome of the game and Clonmel with their determined rucking and driving got the vital next try through Thomas Donnelly which was converted by David Johnston. Half time was whistled with Clonmel 19 – 0 up. A lot done, a lot more to do!

Clonmel’s front 5 of Ciaran O’Donnell, Jamie Driver, Dave O’Callaghan, Adam Bourke and Cian Mackey were doing the hard work and securing good clean ball for the back row of Jack Doyle, Tony Cantwell and Thomas Donnelly. This back row has progressed during the season and is as good a back row unit as you will see. From the base of the scrum Luke Hogan provided great service to Dave Johnston at no.10, who played to our strength and exploited Waterparks soft spots. The centre pairing of Ross Mullane and Adam O’Dwyer knitted together and produced lovely running and soft handling to keep the Waterpark defence on the back boot. Clonmel’s back three of Alex Purcell, Nicholas Ryan and Brian Condon covered any threat that came from Waterpark. Clonmel’s defence ‘man on man’ and drift was excellent throughout and never allowed Waterpark to get front foot ball.

In the second half, a lovely break from the back of a great scrum saw Tony Cantwell beat the Waterpark defence to score under the posts which Dave Johnston converted. That score sealed the outcome for this match and Clonmel’s subs Conal Guilfoyle, Finbar Duff-White, Robert Twomen, Neil Fraher, Rory Cuddihy, Dean Burke, Darren Hoyne, Dylan Guidera, and Adam Quinlivan all played their part in the final try scored by Thomas (Hatrick) Donnelly. The final whistle sounded and Clonmel celebrated a great win and showed what a formidable squad they have become. Tony Cantwell as Captain accepted the East Munster Plate from the Chairman of the branch and proudly called up his team mates to collect their medals.

Congratulations to this U-14 squad on their victory!