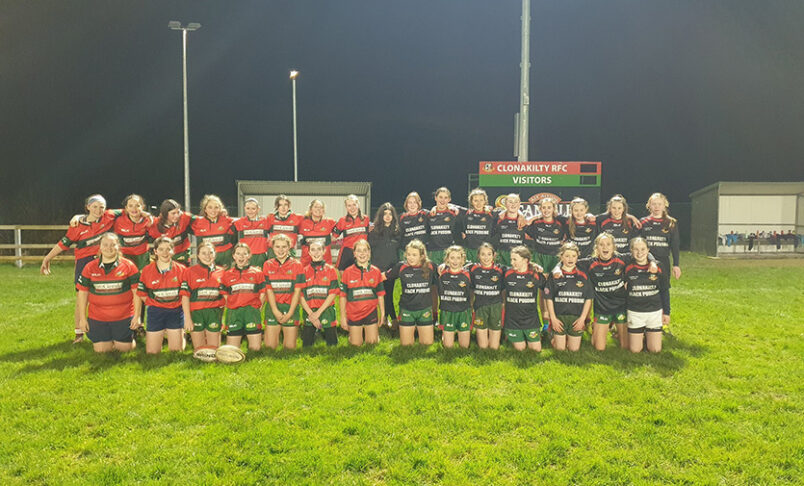 It may have looked like any other busy Saturday at Clonakilty RFC but last month, the West Cork club celebrated a significant milestone in their girls rugby programme.

The club were hosting a Munster Rugby U14 Girls League fixture but instead of welcoming a visiting team from another part of the province, the club were able to field two teams at U14 level – ‘Clonakilty Green’ v ‘Clonakilty Red’.

The club have placed a huge emphasis over the last number of years in growing the number of girls playing rugby and the fruits of that labour were clear to see last month with two Clonakilty RFC U14 girls teams playing out an exciting match which yielded 14 tries.

“I think we realised we had to do it organically, we had to grow from the bottom up,” Clonakilty Director of Rugby Neville Burton said.

Tonight history is made on the main pitch. From humble beginnings, we now have enough for 2 u14 girls teams. They compete against each other in the league. We could not be prouder 👏@MJCRugby @Munsterrugby @germccarthy74 @MunsterWomen pic.twitter.com/KVbdaqeVG3

“There are about 100 coaches involved across boys, girls and adults in Clon but if you go back seven or eight years, there’s probably 30. We just didn’t have the coaches or the structures to do it. We made a really concerted effort to grow from the bottom up.”

“A couple of weekends back we had two U14s girls teams on the pitch in a league match playing each other. It’s probably a culmination of all that work. We’re seeing all those Minis numbers now organically coming through at U14, U16 and for the first time in years, an U18 girls team this year.

“I think there’s about 150 girls now out of 600 from playing membership and it’s growing every year. We’re immensely proud to have it as a real, strong recognised part of our club with numbers that are very soon going to rival the boys.”

Passionate volunteers and a collective buy-in are key elements to this success according to Burton.

Teresa Godwin Coombes as Head of Youth Girls, Sinead McNamara as Head of Minis Girls, Vicky McCabe and Youth Officer Helen O’Hea are just some of the volunteers involved in developing this growth.

Of course, for all clubs across the country in all sports, increasing and sustaining participation levels, particularly among teenagers, can be a challenge.

In Clonakilty, the club has a policy which favours participation over performance and this helps contribute to strong Youth numbers as Burton explains:

“Everybody’s got the same mentality, it’s participation over performance up until U16. When we go back to a green and a red team playing each other a couple of weeks back. It’s the same around our Youth Boys as well. We have two U13 Boys, two U14 Boys and two U16 Boys teams that are not A or Bs, they are equal strength.

“We’re very much living that culture. We’re saying, ‘wherever we end up in competitions or medals and all the rest. That’s an afterthought.’ What we’re very focussed on is participation over performance up until U16s. Kids are seeing that and by running that structure, they’re getting a lot more game-time.”

To sum up, fun and enjoyment takes precedence.