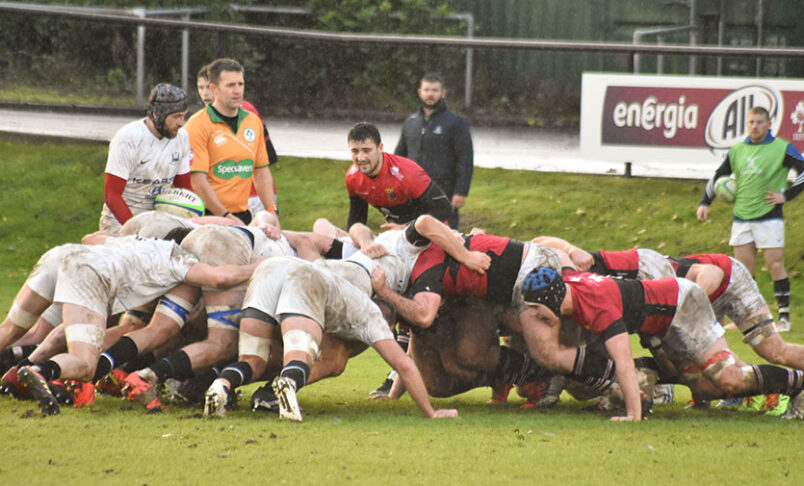 The All Ireland League produced several local derby games with five of them taking place in Munster.

Young Munster won the Limerick Division 1A derby clash with Garryowen at Tom Clifford Park 20-16 in a thrilling encounter. Dan Walsh put the home side ahead with a try which Evan Cusack converted. Two penalties from Jamie Heuston left it 7-6 in favour of the Cookies at half time.

Cusack extended the lead with a penalty and a try by Conor Hayes converted by Cusack gave the home side an eleven point advantage. Credit to Garryowen they hit back with tries from Dylan Murphy and Colm Quilligan to close the gap to a point, but Cusack clinched it with a penalty in the 79th minute.

The Cork derby at the Mardyke was a more one sided affair with Cork Constitution defeating UCC 45-0. Luke McAuliffe, Paddy Casey and Cathal O’Flaherty all scored two tries each for the Temple Hill side and Tomás Quinlan kicked four conversions. Con’ were also awarded a penalty try.

In Division 1B, leaders Highfield made it eight wins from eight, with a 21-10 home win over a difficult City of Armagh side. Travis Coomey, Chris Bannon and Sam Burns scored tries for Highfield and Jamie Heuston converted all three.

Shannon kept their promotion hopes alive with a 15-12 away win over Malone. Trailing 12-3 at half time, John O’Sullivan kicking a penalty for Shannon, the visitors hit back after the break with a Jordan Prenderville try and a penalty try to take the spoils.

Cashel defeated Dolphin 24-7 to maintain their fourth place in Division 2A. Steve McMahon scored two tries and three penalties for the winners and Ciaran Ryan also added a try.

Old Crescent defeated Nenagh Ormond 30-15 to leave the Tipperary side propping up the table. Kevin O’Flaherty opened the scoring for the home side but tries by Gary Fitzgerald and Val McDermott along with a conversion and two penalties by Ronan McKenna gave Crescent an 18-5 half time lead. Dan Hurley and Eoin Murphy secured the bonus point for the visitors and McKenna converted one of the tries.  O’Flaherty and Scott Pearson replied with tries for Nenagh in the second half.

Midleton’s hopes of a top four finish in Division 2C received a setback when they lost away to Omagh Academicals 18-8. The sides were level 3-3 at half time. Stuart Lee kicked a penalty for Midleton and Fionn Bailey scored a try after the interval.

The Tullamore v Clonmel game was called off because of Covid so a 0-0 result is recorded with each side getting two points.

Bottom side Sunday’s Well who trailed 13-6 at half time, came very close to recording their first win, when a third penalty from Eoin Geary and a late try by Fionn Loughrey put the home side ahead but a last minute penalty earned Bangor a 16-14 victory.

The places in the second phase of the Women’s All Ireland League have been decided following leaders Railway Union emphatic home win over Galwegians.

Joining Railway Union in the top section will be U.L. Bohemian, Blackrock College and Old Belvedere. The other remaining sides will play in the bottom section.