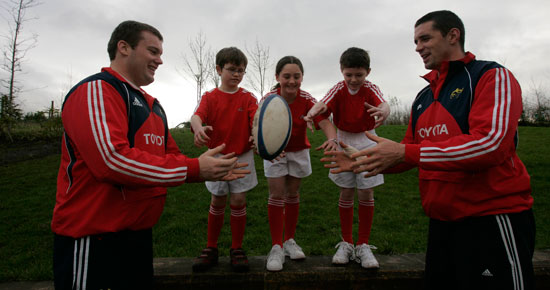 Munster Rugby is pleased to announce that Centra, Ireland’s number one independent convenience store group, are to sponsor the Munster Rugby Summer Camps, which will be taking place at venues all over Munster, for the next three years beginning this summer.

This community based sponsorship demonstrates Centra’s commitment to working alongside its local independent retail partners, to help build vibrant local communities, with Munster Rugby representing a great addition to its programme by encouraging children to get involved in grassroots Sport.

"We are delighted to be sponsoring an activity that is focussed on getting children involved in sport at an early age, in such a fun and interesting way. Research tells us educating children and helping them to be more active and select healthier food options, from an early age, it vital to their future health. We cannot think of a better, more fun approach to being fit and healthy, than spending a summer’s day playing Rugby with friends. And as a proud Munster fan, it would be fantastic if these camps, sponsored by Centra, produced some of our future Munster Rugby stars" said Donal Horgan, Managing Director, Centra.

In line with children’s involvement in rugby, Centra is an energetic brand – a buzzy beacon at the centre of every parish in Ireland, run by people who are passionate about the communities in which they live. As the Munster Rugby motto states ‘to the brave and faithful, nothing is impossible’, there is no better lesson for a child to learn and if they can learn it through the sport of Rugby, then everyone is a winner.

The ever popular Rugby Summer Camps will be taking place all over Munster in Summer 2008, and this time around they’ll have a distinctive "Munster" theme. Previously the camps were organised at national level and all applicants received Irish branded product, however, this summer the camps are being organised at provincial level, so make sure you don’t miss the chance to attend Munster’s very own Rugby Summer Camps. The camps are open to boys and girls aged 6 – 13 years of age.
For more information on the Munster Summer Rugby Camps sponsored by Centra, Ireland number one convenience stores, contact the Munster Rugby Coaching & Development Office on 021-4323693 or e-mail summercamps@munsterrugby.ie

Munster Youths and Munster U16’s in Action This Weekend