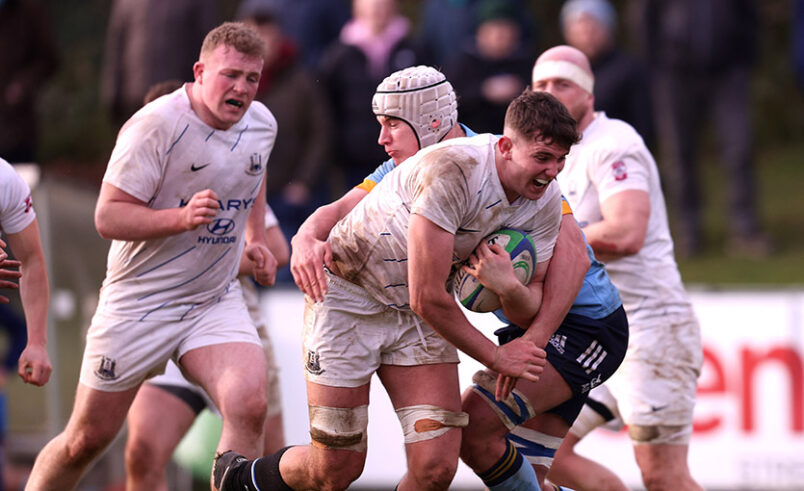 The line-up for the semi-finals and relegation play-off places have all been decided after the completion of the final round of games in the All Ireland League, with some late scores deciding some of the positions.

In Division 1A, Cork Constitution secured their top four place thanks to a late try from Matisse Lamarque which helped Cork Constitution a 21-17 home win over Lansdowne. Niall Kenneally and Cian Barry were the Temple Hill side’s other try scorers. Aidan Moynihan converted all three tries, Con’ will now travel to Clontarf in the semi-final.

Dublin University looked like they were going to take the fourth place in Division 1A as they completely outplayed Garryowen at Dooradoyle in their 34-12 victory until Cork Con’s late try denied them. Ed Barry and Tony Butler scored tries for Garryowen and Butler added one conversion.

Young Munster lost away to Ballynahinch 17-10 with Shane Malone and Eoin O’Connor scoring first half tries for the Limerick side.

U.C.C. who play Ballynahinch in a relegation play-off game home and away lost their final league game 50-14 away to Terenure College. Matthew Bowen and Sam O’Sullivan scored tries for the Students and Daniel Squires converted both.

Highfield will host Shannon in their Division 1B semi-final play-off after both sides recorded bonus point wins.

Highfield had to come from behind to beat St. Mary’s College 28-24 to secure the bonus point victory that kept them ahead of Shannon in the table. Sam Burns, Colin O’Neill, Mark Dorgan and John McLoughlin scored tries for Highfield and Shane O’Riordan converted all four.

Cashel who knew before today’s game in Division 2A that they would be hosting Buccaneers in the semi-final, faced the same opposition in their final game at the Tipperary venue and were defeated 43-38. Brendan Crosse scored two tries for Cashel and Michael Kelly, Brian O’Connor, Philly Ryan and Adam Dunne got one each. Dan O’Neill kicked four conversions.

Old Crescent who had an outside chance of reaching the play-offs, depending on other results, finished in fifth position after they came from behind to beat bottom side Rainey Old Boys 33-10. Tiveta Toia, Val McDermott, John Hurley, Ronan McKenna and Dean O’Grady scored tries for Crescent. Hurley kicked three conversions and McKenna one.

Nenagh Ormond who will travel to Rainey Old Boys on their first leg of the relegation play-off, finished their campaign with a 45-28 away win at M.U. Barnhall. David Gleeson, Derek Corcoran, Conor Muldoon, Niall O’Gorman, Kian O’Kelly and Peter Coman all scored tries for Nenagh. Fionn McGibney kicked five conversions and a penalty, and James Finn also added a conversion.

In Division 2C, Sunday’s Well avoided a relegation play-off with Clonmel when an injury time penalty from Fabien Loughery earned the Cork side a 25-24 victory. Adam Browne gave the ‘Well an early lead with a try but tries from Luke Noonan and Andrew Daly and a conversion by Darren Cross had Clonmel 12-8 ahead. Loughery kicked a penalty for the ‘Well before a try from Luke Hogan converted by Cross had the home side 19-8 ahead at half time. Michael Moynihan scored a try for the ‘Well which Loughry converted but Clonmel hit back immediately with a try from Luke Hogan. In the closing stages James Mulcahy scored the ‘Well’s third try and Loughery converted before the dramatic finish.

Clonmel will host City of Derry in the first leg of their relegation play-off.

Leaders Enniscorthy defeated Midleton 29-24 at the Towns Park. Julian Power scored two tries for Midleton and Rory Horgan and Willie Casey got one each. Stuart Lee converted two of the tries.

Bruff were defeated at home by Bangor 38-20 in their final game.

Instonians made a return to the All-Ireland League after their 25-21 win over Bective Rangers in the final of the Round Robin qualifier.