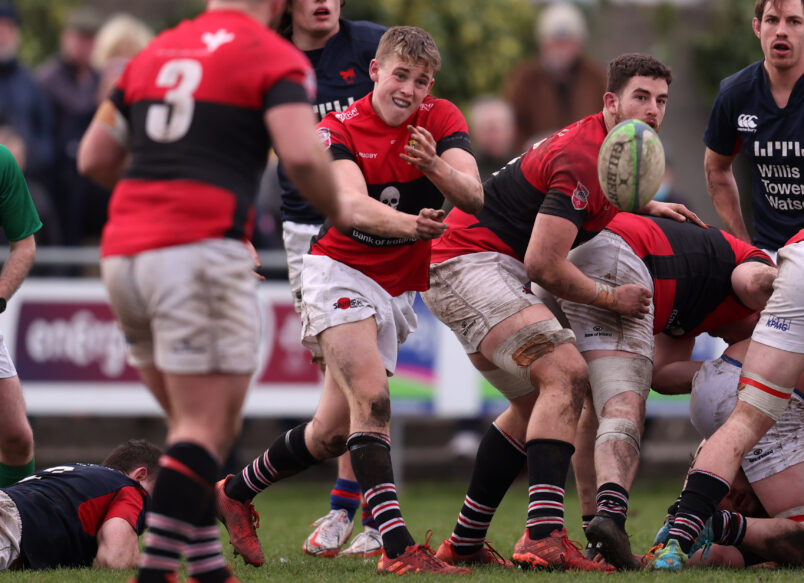 UCC’s Andrew O'Mahony was a try scorer in their win against Banbridge on Saturday. INPHO/Tom Maher

While it was mostly a disappointing day for clubs in the Men’s All Ireland League, UCC produced a great return on the road, while on the provincial derby front Cork Con and Dolphin both secured victories.

Cork Constitution’s 33-16 home win over Garryowen in Division 1A sees them move up two places into the top four. A try by Max Abbott and two penalties by Aidan Moynihan saw Con’ lead 11-6 at half time. Garryowen replied with two penalties from Jack Oliver. Alessandro Heaney, Daniel Hurley, and Billy Scannell added tries for the home side in the second half and they were also awarded a penalty try. JJ O’Neill and Tommy O’Hora replied with tries for Garryowen.

Young Munster lost to Lansdowne 20-13 at Tom Clifford Park, with all the home side’s scores coming in the second half. Dan Walsh scored a try and Conor Hayes kicked a conversion and two penalties.

Shannon remain bottom of the table after their 27-9 away defeat to Clontarf. Three penalties by Mike Cooke had Shannon 9-3 ahead at halftime.

U.C.C. enjoyed further success this week and have extended their lead to four points at the top of Division 1B after their 32-21 away win at Banbridge. Johnny Murphy, Sam O’Sullivan, Joe O’Leary, Andrew O’Mahony, and Killian Coghlan scored tries for College and Daniel Squires kicked two conversions and a penalty.

Highfield lost 6-5 away to Old Wesley but remain in fourth place. Travis Coomey scored a try for Highfield in the opening half who led 5-3 at the interval.

In Division 2A Cashel were narrowly defeated at home to M.U.Barnhall, 22-21. Tries from Brendan Ryan and Michael Hickey, both converted by Ryan O’Sullivan had Cashel 14-5 ahead at the short whistle. A try by Brendan Crosse converted by O’Sullivan extended Cashel’s lead, but they conceded three late tries which denied them victory.

Nenagh Ormond lost away to Ballymena 16-14. Dylan Murphy and Josh Rowland scored tries for Nenagh and Conor McMahon converted both.

Trailing 24-0 at half time at Musgrave Park to Dolphin, U.L. Bohemians staged a second half rally that just came up short as they lost 27-24. Rob Reardon and Cameron O’Shaughnessy scored tries for Dolphin who were also awarded a penalty try. Tomas Quinlan kicked two conversions and two penalties. Ignacio Garcia scored three tries for the Limerick side and Joe Murray got one. Harry Byrne added two conversions.

Disappointment for Old Crescent sees them at the foot of the table following their 15-9 home defeat to Navan. Ronan McKenna kicked three penalties for the Rosbrien side.

Midleton’s 20-12 away defeat by Tullamore sees them drop from third to sixth in Division 2C. Ryan Lehane scored a try for Midleton, who were also awarded a penalty try.

Bruff who lost 17-11 away to Bangor moved up two places. Paul Collins scored a try and two penalties for Bruff.

Sunday’s Well lost 19-10 away to Omagh Academicals. Finn MacFhlanncha scored the ‘Well’s try and Fabian Loughrey kicked a penalty and a conversion.

Clonmel slipped into the relegation zone after they lost 43-21 away to Skerries conceding four tries in the second half having been level 21-21 at half time. Dan Hosek and Jason Monua scored tries for Clonmel. Albert Fronek and Dean Slattery each added a conversion, and they were also awarded a penalty try.

Check out rest of the weekend’s action from across the province here.