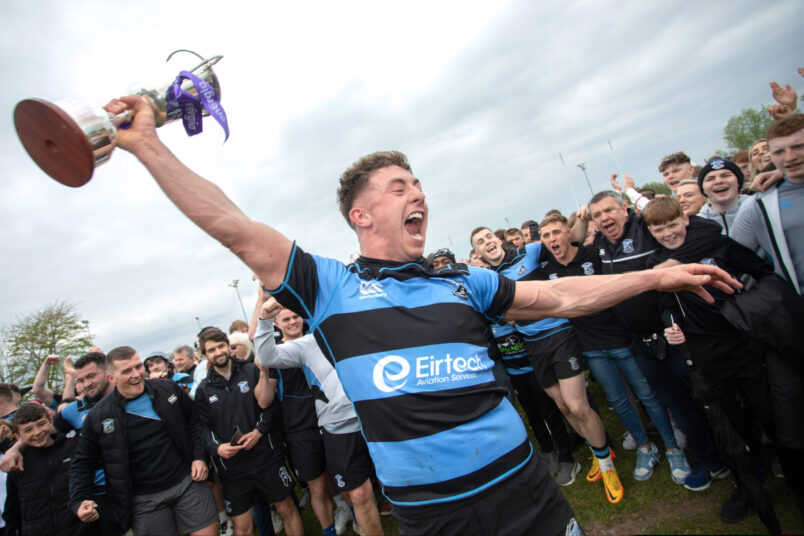 The final day of the All Ireland League produced plenty of drama and excitement as three of the four Munster sides were celebrating with UCC being relegated to Division 1B.

A strong finish by Ballynahinch saw them defeat UCC at Ballymacarn Park 31-17 (52-34 aggregate) in the Division 1A Relegation Playoff. The home side raced into an early 12-0 lead; but tries from Andrew O’Mahony and Mark Bissessar, both converted by Daniel Squires put College ahead just two points behind on aggregate.

Ballynahinch responded with a third try from Conor Rankin, but a penalty by Squires tied the game 17-17 at halftime. Tries by Josh Hanlon and Greg Hutley both converted by Rankin ensured the Ulster side their place in Division 1A next season.

Shannon are back in the top flight after they defeated Naas 30-15 in the Division 1B playoff final at Coonagh. Out-half Jake Flannery was Shannon’s hero contributing 20 of his side’s tally. Shannon took an early lead with a try from David Maher which Flannery converted. A penalty, try and a conversion by Flannery had the home side 17-3 ahead at the interval. Two penalties from Flannery and a conversion of a Josh Costello try ensured victory for the large home following.

Nenagh Ormond retained their Division 2A status with a 26-13 home win over Rainey Old Boys in the relegation playoff (aggregate 43-30). Peter Coman, Evan Murphy and Nick Irwin scored tries for the Tipperary side and Conor McMahon kicked three penalties and a conversion.

Clonmel despite losing to City of Derry 17-8 at Judges Road, preserved their senior status after their 41-34 aggregate win and thus sent the Ulster side down to Junior Rugby next season. Clonmel found themselves 7-0 down after 25 minutes after the home side were awarded a penalty try.

They were then reduced to 14 when one of their players received a red card for a high tackle and Derry converted the resulting penalty for a 10-0 half time lead. A try by Henry Buttimer and a penalty by Dylan Cadogan reduced the defict to 10-8. With the final play of the game Derry scored a converted try, but it was the visitors who were celebrating at the final whistle.