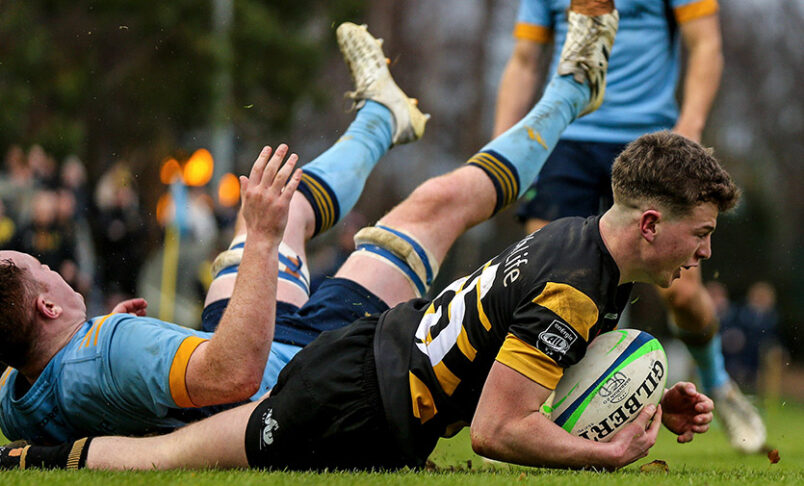 The Men’s All Ireland League reached the half way stage with Shannon ending Highfield’s unbeaten run in Division 1B and a late come-back by Cashel sees them move into third place in Division 2A.

Young Munster were the only Munster side to win in the top flight  as they travelled to Belfield to defeat U.C.D. 18-12. A try by Cian Casey and an Evan Cusack penalty gave the Limerick side an interval 8-0 lead. Alan Kennedy scored a second try for “The Cookies” and Cusack converted and also added a penalty.

Cork Constitution’s recent good run came to a halt at Temple Hill when they lost to Terenure College 16-12. The sides were level 3-3 at half time with Aidan Moynihan kicking four penalties for the home side.

Garryowen’s recent poor form continued when they lost for the fifth consecutive time at home to leaders Clontarf 17-0.

Dublin University proved too strong for U.C.C at College Park as they won 48-8 and also claimed the Dudley Cup. Rob Hedderman kicked a first half penalty for the Cork students and Eoin Monahan added a try after the break.

A penalty in each half by John O’Sullivan ended Highfield’s unbeaten run in Division 1B as Shannon ran out 6-0 winners on the back pitch in Thomond Park.

Cashel who trailed M.U. Barnhall 21-10 with ten minutes remaining staged a dramatic late rally to claim a 29-21 bonus point win at Parsonstown in Division 2A. The Tipperary side were awarded two penalty tries. Ciaran Ryan and Michael Hickey scored tries for the Tipperary side and Steven McMahon kicked a penalty and a conversion, with their last try coming with the last play of the game.

Dolphin kept their hopes of a top four finish alive with a 42-12 home win over bottom side Nenagh Ormond but only for injuries to key players and twice being held up over the line the result might have been a lot closer. Murray Linn and Tim Marron each scored two tries for Dolphin and Phillip Dowling and Craig O’Connell got one each. Daryl Foley converted all six tries. Fionn McGibney and Willie Coffey scored tries for Nenagh and Conor McMahon added a conversion.

U.L. Bohemian won the Limerick derby 28-17 against Old Crescent at Takumi Park and thus moved away from the relegation battle. Conor Botha scored two tries for the Robins and Teddy Rowsome and Kian Regan got one each. Harry Byrne kicked four conversions. Cathal O’Reilly, Jake Considine and Jordan Higgins replied with tries for crescent and Ronan McKenna added one conversion.

Midleton moved to within two points of fourth place Tullamore with a 27-13 home win over the Offaly side in Division 2C. Bryan Moore, Rob Carey and Ritchie Daly scored tries for Midleton and Stuart lee converted all three and also added two penalties.

Clonmel lost at home to Enniscorthy 31-15, a result that sees the County Wexford side go top of the table. Luke Hogan scored two tries for Clonmel, Dean Slattery kicked a penalty and Alex Sheehan a conversion.

The Women’s All Ireland League first stage concluded with Railway Union finishing on top on points difference ahead of U.L. Bohemian.

The difference between the top and bottom of the table was very evident at Tanner Park where Blackrock College defeated Ballincollig 84-0.