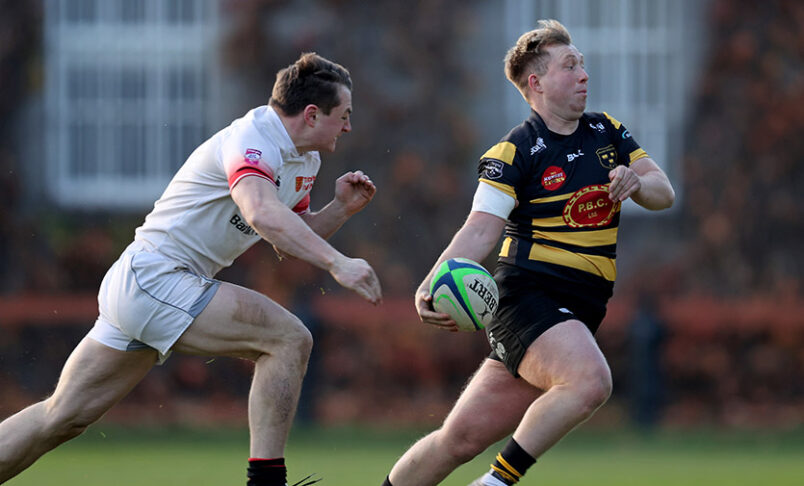 Of the 16 Munster sides in action in the All Ireland League this weekend only six managed to win their games.

Clontarf remain top of Division 1A after their 36-17 win over U.C.C. at the Mardyke. The students were awarded a penalty try and substitute John Willis also scored a try. Rob Hedderman kicked a conversion and a penalty.

Cork Constitution were the only Munster side to win in this division as the battled back from 10-5 down at half time to beat bottom side Ballynahinch 19-17 at Ballymacarn Park, a result that sees them move up to third place after their poor start to the campaign. Rob Jermyn, Aidan Moynihan and John Forde scored tries for the Cork side and Moynihan kicked two conversions.

Young Munster lost for the second successive week when Dublin University defeated them 38-3 at College Park. Evan Cusack kicked a penalty for the visitors.

Garryowen lost for third time losing at home 29-5 to Lansdowne. Colm Quilligan scored a first half try for the home side.

In Division 1B Highfield maintained their lead at the top with a 26-19 win over Banbridge at Rifle Park. Eddie Earle scored two tries for Highfield and Ben Murphy and Sam Burns got one each. James Taylor kicked three conversions.

Shannon lost more ground on the leaders after their 35-29 home defeat by Naas.  Darren Gavin and Lee Nicholas each scored two tries for Shannon and Killian Dineen got one. John O’Sullivan converted two of the tries.

Division 2A leaders Queens University defeated U.L. Bohemian 40-8 at Dub Lane to maintain their three point lead at the top.

Cashel defeated Old Crescent 40-19 at Takumi Park. It was only in the final quarter that the Tipperary side pulled away for victory. Tries from Niall Fitzgerald, Steven McMahon and Michael Hickey plus two conversions from Steven McMahon gave Cashel a 19-0 lead before Val McDermott opened the home side’s account with a try on the stroke of half time.

Ciaran Ryan extended the visitors lead with a fourth try before Crescent hit back with tries from Dan Hurley and McDermott both converted by Ronan McKenna closed the margin to seven points. Tries from Brendan Ryan and Aidan McMahon both converted by Steven McMahon ensured victory for Cashel.

Dolphin battled from 20-7 down to beat M.U. Barnhall 29-20 at Musgrave Park. James Vaughan scored two tries for the winners and substitutes Barry Fitzgerald and Cian Scott got one each. Daryl Foley converted all four tries.

Two tries from Kevin O’Flaherty and a conversion  by James Finn was not enough for Nenagh Ormond who lost away to Ballymena 46-12.

Midleton continued their good run with a 31-10 win over City of Derry in Division 2C at the Towns Park. Rory Horgan, Ger McIntyre, Will Casey, Bryan Moore and Ryan Lehane were Midleton’s try scorers and Stuart Lee kicked three conversions.

A last minute penalty saw Bruff lose again with the last play of the game when Tullamore defeated them 16-13 at Kilballyowen Park. Jack O’Grady scored a try for the home side and Adam O’Dwyer kicked two penalties and a conversion.

The Clonmel v Omagh Academicals game was called off because of Covid and both sides receive two points each with a 0-0 result being entered.

A last minute try from Eimear Considine and converted by Nicole Cronin earned U.L. Bohemian a 17-16 win over Blackrock College at Stradbrook. Chloe Pearce and Alana McInerney also scored tries for the Limerick side.

Ballincollig lost at home to Malone 33-17.

Men’s All Ireland League Division 1A:

Men’s All Ireland League Division 1B: