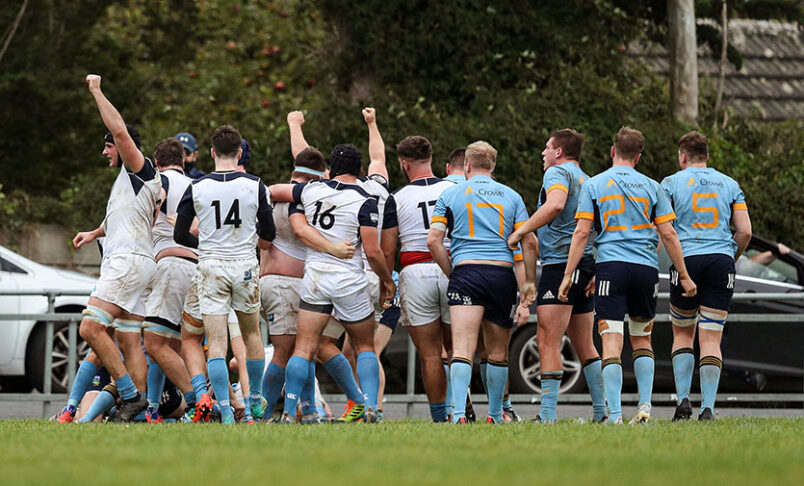 Garryowen and Highfield retain top spot in Division 1A and 1B respectively in the All Ireland League after the third series of games.

Garryowen recorded their third bonus point win with a 26-13 win over U.C.D. at Dooradoyle. The Dublin students led 10-7 at half time  with Bryan Fitzgerald scoring Garryowen’s try and Tony Butler converted. Two tries by Sean Rennison and another by Fitzgerald, two of which Butler converted gave the Limerick side the spoils.

Cork Constitution are still searching for their first win after losing 31-24 to Clontarf at Castle Avenue. JJ O’Neill and Sean French scored tries for Con’ and Aidan Moynihan contributed four penalties and a conversion.

U.C.C. are still pointless following their 31-15 defeat by Lansdowne at the Mardyke. Alex Kendellen and George Coomber scored tries for the Students and Daniel Squires added a conversion and a penalty.

A penalty try in the fourth minute of added time saw Shannon lose for the second time when City of Armagh defeat them 23-20 at the Palace Grounds. Trailing 10-0 after seventeen minutes the Limerick side rallied with a penalty try, a Daniel Okeke try and a conversion and two penalties by John O’Sullivan to lead 20-16 entering the final minutes.

In Division 2A bottom side U.L. Bohemian were the only one of the five Munster sides in this Division to win.

The Robins collected their first win of the campaign with a hard earned 18-14 win over Cashel at the U.L. Arena. Steve McMahon put Cashel ahead with a penalty, but the home side hit the front with a penalty try. McMahon and Harry Byrne exchanged penalties before a Joe Murray try had the home side 15-6 ahead at the interval. A third McMahon penalty and a try by Niall Fitzgerald closed the gap to a point but another Byrne penalty ensured victory for the home side.

Nenagh Ormond lost away to Buccaneers 26-14 with Patrick Scully scoring a try for the Tipperary side and Fionn McGibney kicked three penalties.

A late rally by Old Crescent away  to Ballymena which yielded two tries by Niall Hardiman and converted by Ronan McKenna earned the Limerick side a losing bonus point as they went down 29-25. It was 14-6 to the home side at half time. Cathal Monaghan scored Crescent’s opening try and McKenna kicked two first half penalties.

In Division 2C the Munster derby between Bruff and Clonmel finished all square 14-14. Twice Bruff led with Kieran O’Dwyer scoring both their tries and Adam O’Dwyer converted both. Niall Campion and Tony Cantwell replied with tries for Clonmel and Dean Slattery converted both.

Midleton lost away to Bangor 24-14.  Charlie Murphy and Denis Broderick scored tries for Midleton and Stuart Lee converted both.

A late try by James Mulcahy converted by Alex Lane saw Sunday’s Well snatch a losing bonus point at Musgrave Park as the home side lost away to bottom side City of Derry 20-14. Lane scored a try and converted it in the opening half.