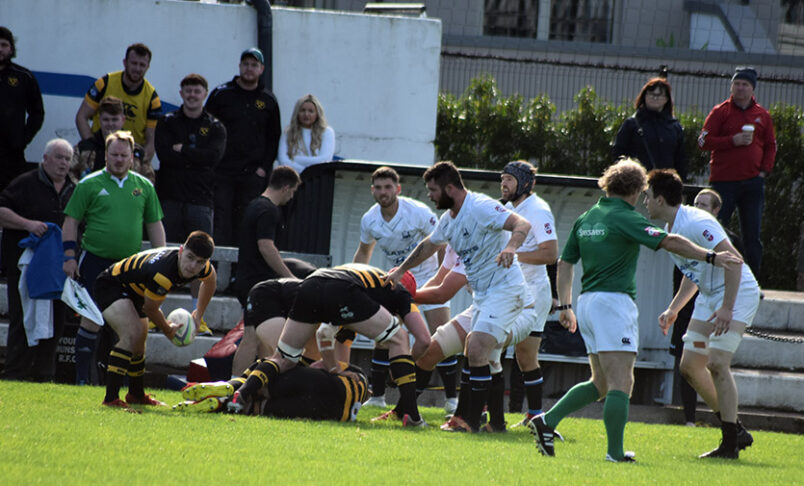 The top game of the day was at Temple Hill, where Young Munster held out for a 24-17 win over Cork Constitution in Division 1A. A try from Conor Hayes and two penalties by Evan Cusack had the visitors 11-3 ahead at half time. Aidan Moynihan replied with a penalty for the Temple Hill side. Pa Campbell extended the Cookies lead with a try and Cusack converted. Con’ were then awarded a penalty try. Barry Galvin scored a try for Con’ and Moynihan converted. Despite being down to 12 players at one stage Cusack added two further penalties for Munster’s as they held out for a great win.

Garryowen made it two bonus point wins from two after their 32-20 win over U.C.C. at Dooradoyle. The sides were level 10-10 at half time, but the home side proved too strong after the break running in three tries. Colm Quilligan scored two tries for the Light Blues and Pat O’Toole, Tommy O’Hora, and Jamie Shanahan got one each. Tony Butler kicked two conversions and a penalty. The Students replied with tries from Louis Bruce and Joe O’Leary. Darragh French kicked two penalties and a conversion, and O’Leary added one conversion.

Ballincollig preserved their unbeaten home record with a 31-17 win against Galwegians at Tanner Park. The home side led 24-7 at half time. Roisin Ormond and Gemma Lane each scored two tries each for Ballincollig and Clare Coombes got one. Denise Redmond kicked two conversions and Alison Kelly one.

Highfield despite trailing 10-0 in the opening stages of their encounter away to Navan, hit back to run out 42-17 winners and go top in Division 1B of the men’s All Ireland League. Miah Cronin and Paul Stack scored two tries each for the winners and Ronán O’Sullivan and Chris Bannon got one apiece.  James Taylor converted all six tries.

A try from Kieran O’Shea and a conversion and two penalties by Harry Byrne were not enough for U.L. Bohemian who lost away to M.U. Barnhall 33-13.

Queens University went top of the table after their 40-21 away win over Old Crescent at Tukami Park. Cian Raele, Jack O’Mahony were among the Old Crescent try scorers and Ronan McKenna converted all three ties.

The Cashel v Nenagh Ormond was recoded as a 0-0 draw as the game could not go ahead following a Covid out-break.

In Division 2C Midleton won the Cork  derby with Sunday’s Well 14-6 at the east Cork venue. The ‘Well led 6-0 with two penalties from Eoin Geary, but the winners whose pack totally dominated all facades of the forward exchanges had to wait until they were awarded a penalty try nine minutes from time. Rob Carey added a second try in the closing minutes and Stuart Lee converted.

Clonmel were well beaten 29-13 at home to Bangor. Roland Marki and Dean Slattery scored tries for Clonmel and Aidan Hickey added a penalty.

Munster Senior Women To Be Honoured At Thomond Park