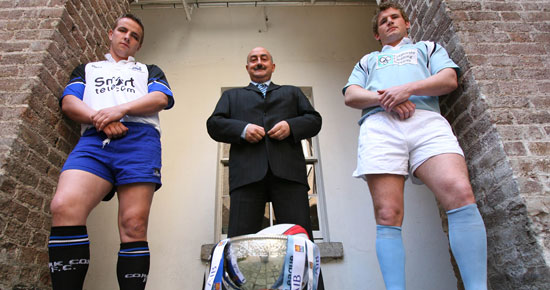 Next Saturday’s AIB League Division 1 final will be an all Munster affair as southern stalwarts of the club game, Garryowen and Cork Constitution, meet in Musgrave Park, Cork to battle for the overall title of AIB League Champions. Kick off it at 2.30pm.

This fixture marks the first AIB Cup winners head-to-head in a league final; Garryowen were crowned AIB Cup champions last month when they overcame Belfast Harlequins, whilst Cork Constitution enjoyed similar success in the inaugural competition last year when they triumphed over St. Mary’s College in the final.

Garryowen and Cork Constitution are meeting for the first time since their AIB League fixture held in Dooradoyle in early January. On that occasion Cork Constitution were victorious with an incredibly close score of 11-12, to the visitors.

Cork Constitution have enjoyed great success all season, and secured the top spot in the league table last month as AIB League winners. In doing so, they ensured a home semi-final last week, but had a close encounter when they met UL Bohemians in Temple Hill last Saturday. Trailing for most of the game Con came through with a 21-18 victory, following a late intercept try from winger Cronan Healy.

In securing the top spot in the AIB League table this year, Cork Constitution have brought to four, the number of times they have enjoyed first place in the league table in the past seven seasons, so the side will be keep to get their hands on the cup on Saturday.

Garryowen will be just as eager to win on Saturday, as they travel to Cork on track for a unique AIB double. Fresh from their victory in the AIB Cup last month, the Dooradoyle residents overcame a strong Clontarf side in their league play-off last Saturday and came away with a 28-15 win.

Garryowen have performed steadily all season in the league, and finished in third place on the table last month.

Another added incentive for both clubs competing in the final on Saturday is the prospect of representing Ireland at the Langedoc-Roussillon amateur rugby tournament, which will take place in France from September 3rd – 15th during the Rugby World Cup. The club that wins the final on Saturday and is crowned AIB League Champions will go forward to the tournament. The team will be sponsored by AIB, and all travel and participation costs for the tournament will be covered by the IRFU and AIB.

The AIB League Division 1 final will be played on Saturday 5th May in Musgrave Park, Cork with a 2.30pm kick off.