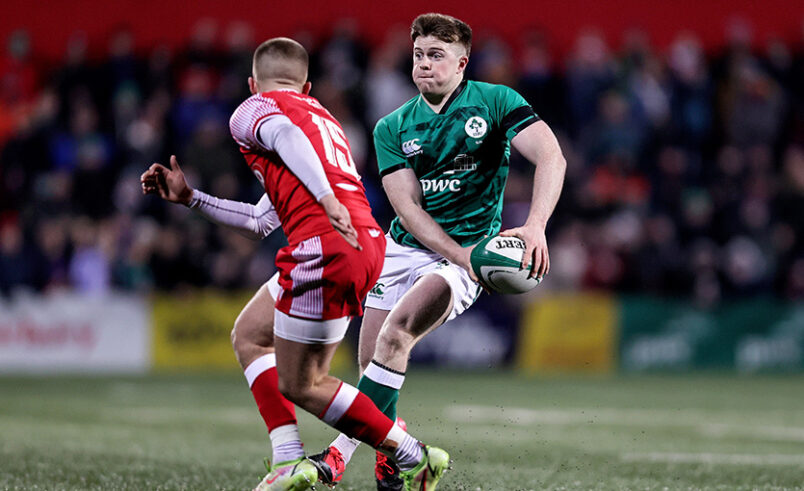 Patrick Campbell has been named in the starting XV ©INPHO

Murphy has made four changes in personnel to his starting XV from the win over France in Aix-en-Provence, with Chay Mullins, Jude Postlethwaite, Fionn Gibbons and Matthew Devine coming into the starting XV for the third round clash against Italy in Cork.

Winger Mullins comes back into the back three having scored a brace of tries against Wales, with Patrick Campbell continuing at full-back and Gibbons shifting to the left wing.

Having featured in last summer’s U20 Six Nations, Postlethwaite – who also has HSBC World Rugby Sevens experience with Ireland – comes into midfield to partner Ben Brownlee for his first appearance of the 2022 Championship, while Devine joins Charlie Tector in the half-backs.

Murphy has named an unchanged starting pack for the visit of Italy, with Reuben Crothers once again captaining the side from the back row.

Speaking ahead of the game, the Ireland Head Coach said: “We’ve had another good week of preparation in the build-up to what we know will be a tough challenge. Italy enjoyed a brilliant win over England last time out and certainly we’ll need to step it up another gear this week in front of our home supporters.

“The atmosphere at Musgrave Park for the Wales game was memorable and it lifted the whole group to have that vocal and strong home support behind us. We’re excited to get back to Cork on Friday night and hopefully build on our performances to date.”