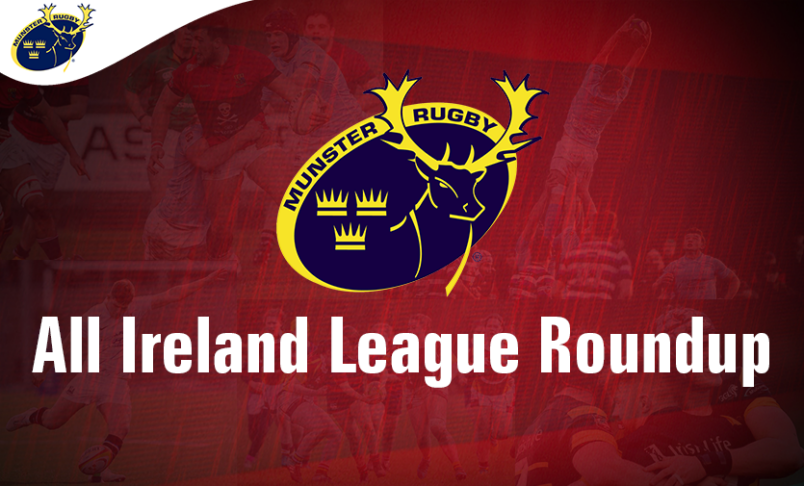 After twelve series of games in the All Ireland League, the battle for places in the top four in each division intensifies as clubs also battle to avoid the bottom two play-off relegation places.

In Division 1A three of the top places look destined to Leinster sides Clontarf, Lansdowne and Terenure College, with Young Munster and Cork Constitution battling it out for the fourth place.

Young Munster lost fourth place after their surprising 27-8 home defeat by Dublin University. A try by Dan Walsh and a penalty by Evan Cusack had the “Cookies 8-5 ahead at half time but the visitors dominated all aspects of play in the second half to emerge with the spoils.

Garryowen were brought back to earth after last week’s derby win over Young Munster when they lost away to Lansdowne 46-5. Bryan Fitzgerald scored a try for Garryowen in the opening half.

Bottom side U.C.C.  put up a credible performance away to leaders Clontarf as they lost 26-13. The students trailed 14-13 at the interval with Tim Duggan scoring their try and Eoin Monahan converted and also added two penalties.

Highfield ended a three game run without a win in Division 1B when they defeated Banbridge 19-8. Paul Stack scored two tries for the winners and skipper Chris Bannon got one. James Taylor added two conversions.

Naas defeated Shannon 38-29 to move ahead of them into fourth place in a closely fought game at the Co. Kildare venue. Conor Glynn, Charlie Carmody, Ikem Ugwueru and Lee Nicholas scored tries for Shannon and John O’Sullivan kicked three conversions and a penalty.

A last minute converted try saw Cashel snatch a dramatic 22-19 home win over Old Crescent to move into second place in Division 2A. Niall Fitzgerald, Fearghal O’Donoghue and Alan McMahon scored tries for Cashel and Cian Mullane  kicked two conversions and a penalty. Dan Hurley replied with a try for the Limerick side and Ronan McKenna kicked a drop goal, conversion and three penalties.

A strong first half was not enough for Dolphin who slumped to a 50-24 heavy defeat away to M.U. Barnhall. James Vaughan, Daryl Foley and David O’Mahony were among the Dolphin first half try scorers.

The big surprise in this division was Nenagh Ormond’s 41-7 home win over Ballymena a result that gives them a battling chance of avoiding the relegation play-off. John Hayes, David Gleeson, Peter Coman, Evan Murphy, John O’Flaherty and Johnny Hayes were try scorers for Nenagh and Fionn McGibney kicked four conversions and a penalty.

The two bottom sides in Division 2C recorded surprising wins in their battle to avoid a relegation play-off. Clonmel recorded their first win of the season with an 8-6 away win over Omagh Academicals. Ian Cunningham scored a try for the Tipperary side and Darren Cass kicked a penalty.

A second half fight back by Sunday’s Well saw them defeat Skerries 14-9 at Musgrave Park. Evan O’Connell scored a try for the ‘Well, Eoin Geary kicked two penalties and Josh Featherstone one.

Midleton did both Munster sides a favour when they recorded a 20-19 away win against City of Derry, Ryan Lehane, Julian Power and Jack Colbert scored tries for Midleton and Stuart Lee kicked a conversion and a penalty.

Bruff’s 28-7 away defeat at Tullamore sees them just three points above the relegation zone.

U.L. Bohemian suffered a surprising 31-22 home defeat by Blackrock College in the Women’s Top Four play-offs. Clodagh O’Halloran scored two tries for the Limerick side and Eimear Considine got one. They were also awarded a penalty try.