Gavin Coombes – “For Gavin, It Was A Case Of That Want And That Desire” 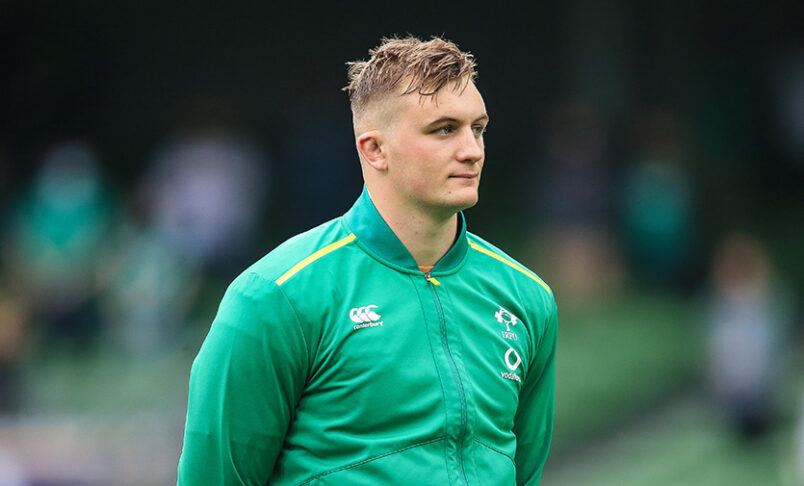 Gavin Coombes ahead of his Ireland debut v Japan ©INPHO

It was a special day for all involved in Skibbereen RFC on Saturday as Gavin Coombes entered the fray in the 70th minute at the Aviva Stadium to earn his first senior international cap.

A few words of encouragement from Peter O’Mahony as the Betsboro man came on for his provincial captain and Coombes became the first senior international to come from Skibbereen RFC.

Back in West Cork, Aidan Bushe was one of many viewers beaming with pride at the sight of Coombes running onto the pitch. Bushe coached Coombes at Skibbereen from Minis level all the way up through the age grades and he admits it was a special moment for him and for everyone involved at the club.

“Just to see him put on the green jersey and running on was fantastic. It’s great for everyone in Skibbereen, especially for anyone who was involved in his development and coming up along the line. It was a really, really proud moment for me.”

Bushe is embedded in Skibbereen rugby. He played junior rugby with the club until he began coaching when his sons were old enough to play. Gavin and his provincial colleague & cousin, Liam, were the two standout players as he recalls coaching the duo up through the levels as they secured silverware for the club. 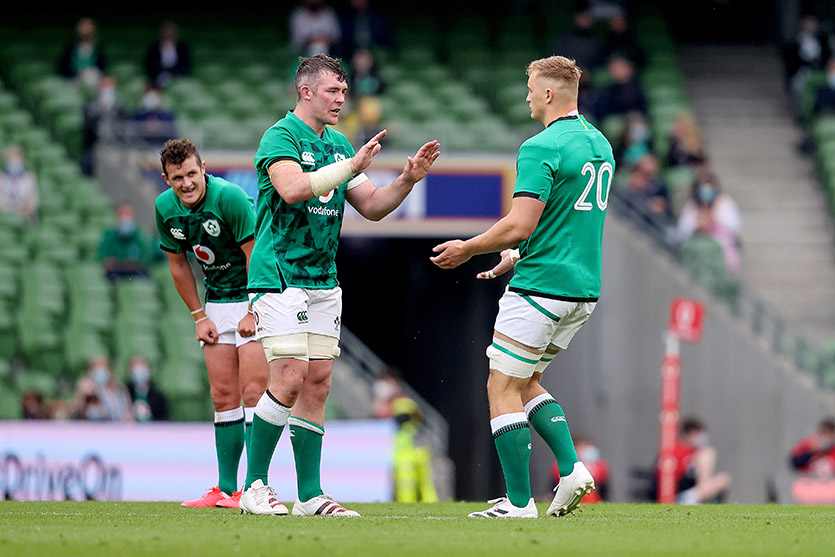 “We had a pretty strong team right up from Minis and as soon as they started playing U12/U13, we started winning trophies. At Under 12 we won the cup against Sunday’s Well, beat Well in Well. I think that day Liam got two or three tries and Gavin got two or three tries. They were the backbone of the team, really. So our team was based around the two of those lads.”

Although the focus on Minis and Youth rugby is very much on skills, participation and fun, Bushe can remember being impressed with Coombes from an early age and he even sees some of those early traits transferring to the highest level.

“Even at that stage, you could see he was a step ahead of everyone else. His ball carrying, he’d go the length of the pitch in the blink of an eye. Beating players, going through a tackle, side-stepping. He had great hands. Even at that stage, his passing was very good.

It wasn’t just Coombes’ on-pitch exploits that impressed Bushe during those early years. He explains that the 23-year-old was always very driven and motivated to play, no matter the type of match or situation.

Coombes’ development continued when he entered Bandon Grammar secondary school. George Bradfield, the Gamesmaster at the school for over 30 years, was already aware of the youngster due to his own connections to Skibbereen. 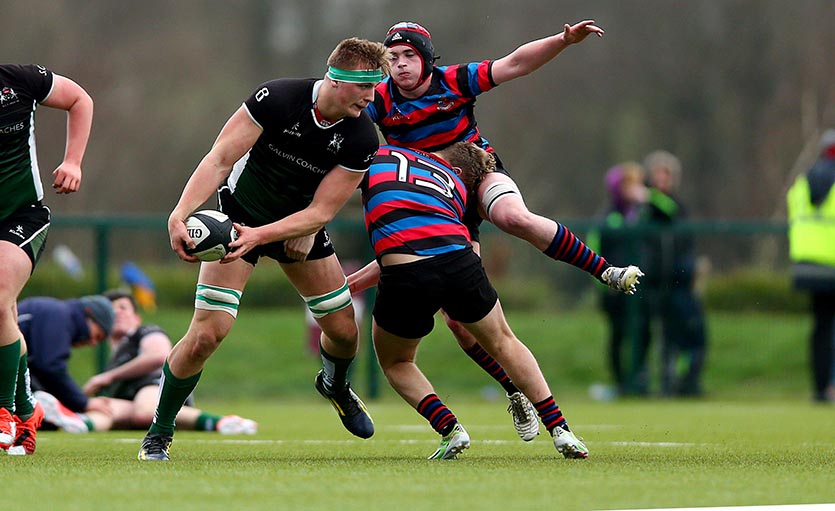 Bradfield recalls that Coombes was passionate about multiple sports including hockey and Gaelic Football and that it wasn’t until U16 level that he really began to focus on rugby.

“I put him forward for an U16 Development School squad and he became more focussed on rugby,” Bradfield recalls.

“He probably gave up the other sports at that stage because he saw an opportunity there. He progressed through the development squad because he was a great person for when an opportunity presented itself, he took that opportunity. He never stood back.

“And only if it was a small bit of a game in a trial, he was always very positive. He always got the best out of himself when the chips were down and he’s shown that now when he gets an opportunity playing with Munster and what he has done.”

The taking of opportunities, no matter how slim, is a common thread running through the conversations with Gavin’s former coaches. Bradfield recalls how an U19 international between Ireland and France at Thomond Park demonstrates this very trait.

“He did get an opportunity at U19 to play an international. It was actually down in Limerick against France as part of the double-header they have every year. And he only came on late in that game, in the last 20 minutes but he made the difference. He scored a try. He only got small opportunities at times but he certainly takes them when they are presented to him.

“He’s never found wanting, you know? This means he must have great motivation that when he sees an opportunity, it could only be 10 or 15 minutes, he does really make the best of it.”

It was around the time that Coombes turned 16 and entered the senior cycle at Bandon Grammar that his potential really started to shine through. Bradfield remembers a Mungret Cup final against Limerick school St. Clement’s that reinforced his already strong beliefs that Coombes could have a long career in the game. 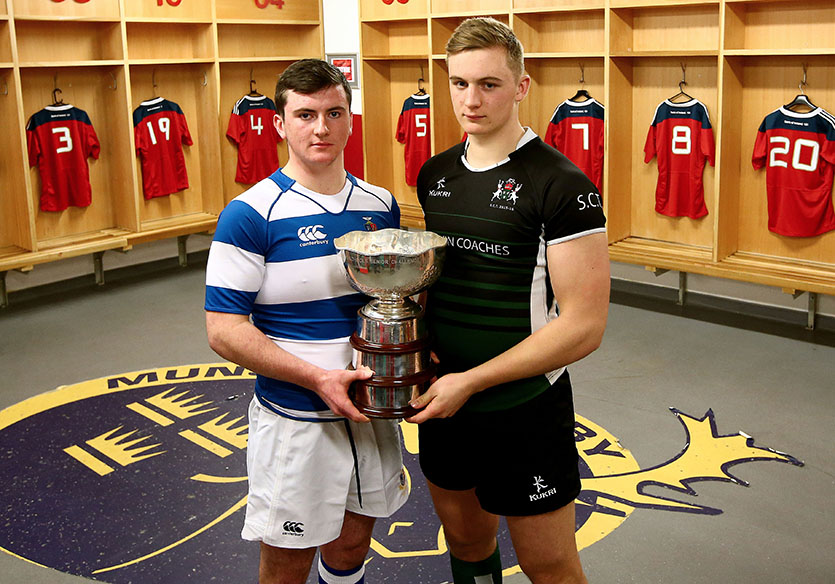 “From the age of 16 on, he really developed. We had a Mungret Cup final against St Clement’s and we were under tremendous pressure because they had a great backline. Our pack were fairly strong but I remember Gavin taking off in the middle of the field, I think he was playing number eight that day, and he just ran down the centre of the field and destroyed the opposition. Just tore them apart, you know?

“When the chips are down, he can really turn it on. He can surprise you at times with what he does. He’s a bit different from a regular back-row or number eight. He has a bit more about him.”

Speaking a few weeks before Coombes’ debut against Japan, Bradfield explains that the former pupil’s rise through the ranks has provided a source of motivation for the current players in the school, particularly during the last 18 months when no rugby was played due to Covid-19 restrictions.

During his final years in school, Coombes was also enhancing his development through the Munster representative pathway at U17, U18 and U19 level, the latter of which saw Coombes and his cousin Liam help Munster to a 100% record in the interprovincial championship that year.

Once he left school, Coombes was awarded a place in the Greencore Munster Rugby Academy. With the move up to Limerick, the West Cork native also settled into the confines of Tom Clifford Park with Young Munster. 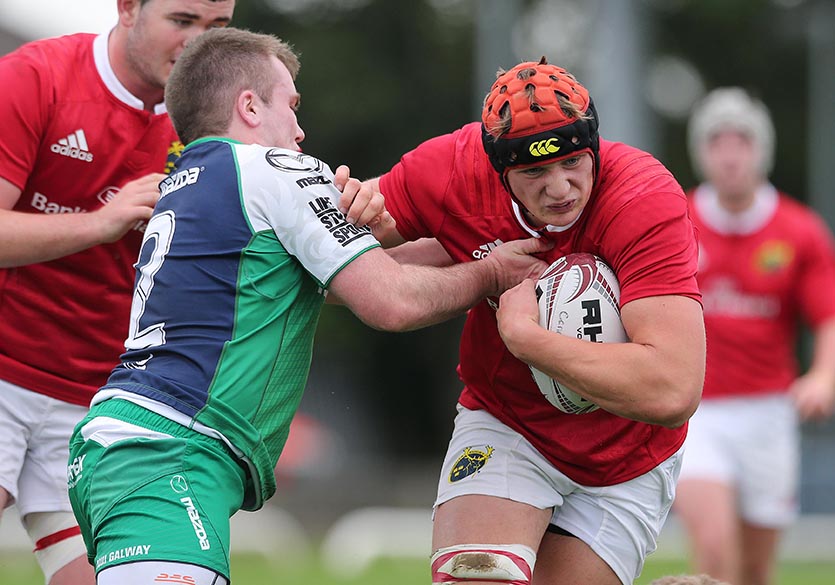 Young Munster head coach Gearoid Prendergast remembers being immediately impressed with the then 18-year-old, both on and off the pitch.

“He was still only 18 years of age, you could see he was very well developed physically, quite a mature guy,” Prendergast said.

“Very softly spoken for this big, strong guy we were meeting. From the outset, I was very impressed with him. He settled into the club very quickly. Probably a little bit quieter at the start but he got the head down and you could tell from that early age, this guy wanted to play rugby at a very high level. I think that’s a great start for a guy his age.

“Sometimes players are a little bit inexperienced and they think it will just kind of happen for them and it’s not always the case. For Gavin, it was a case of that want and that desire. That shone through very early. You could see from his early playing days that he was more than capable of playing at a high level.”

Coming from school and being thrust into the rough and tumble of adult rugby in Division 1A of the AIL can be a difficult transition for players but Prendergast explains that it didn’t take long for Coombes to find his feet and become a key member of his squad.

“He’s young and particularly for forwards as well, it’s a challenge for every player but particularly for forwards, that progression might take a little bit longer. It’s easy to say it now but I didn’t have any doubt that he was going to play rugby at a higher level because you could just see both mentally and physically, he’s all the attributes to do that.”

“He dealt with the challenges of 1A very well at a young age. It took a little bit of time initially because it is a big jump from schools rugby to senior rugby but he handled that transition very well.” 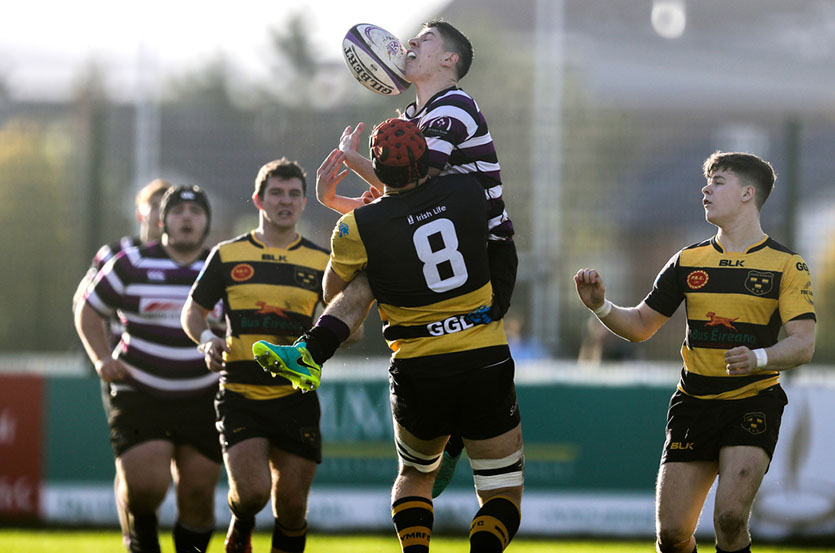 Gavin Coombes playing for Young Munster in 2016 against Terenure ©INPHO

As with Skibbereen and Bandon Grammar, Coombes’ debut against Japan was a proud moment for everyone involved in the Limerick club.

“Delighted for Gavin. It’s always a proud moment when you see one of the Young Munster players getting capped. Very proud. Delighted for his family. I’ve met some of them and they’re a lovely family, a big sporting family. Delighted for his club in Skibbereen and for Bandon. They put in the years as well.

“Of course, I like to think we played a part too. You’ve got to mention the Munster Academy system as well, they’ve done a fantastic job bringing him through. If you look at his pathway, he’s a really good example of how you can go right the way through the system if you’ve got all the attributes and you’re willing to stick at it.”

With plenty of AIL rugby under his belt as Coombes progressed through the Munster Academy, the 23-year-old represented Ireland U20s in 2017 in both the Six Nations and World Championships. He then made his Munster debut against the Cheetahs in 2018 while still in the Academy.

Of course, the 2020/21 campaign was a breakthrough season with 15 tries scored in 22 appearances, the most tries ever scored by a Munster player in a single season.

With an international debut under his belt and a first start to come against the USA this weekend, Coombes is deservedly capping off a stellar season with international honours.

There will undoubtedly be many of those involved in his development from Munster, Skibbereen, Bandon Grammar and Young Munster watching on with pride and satisfaction.