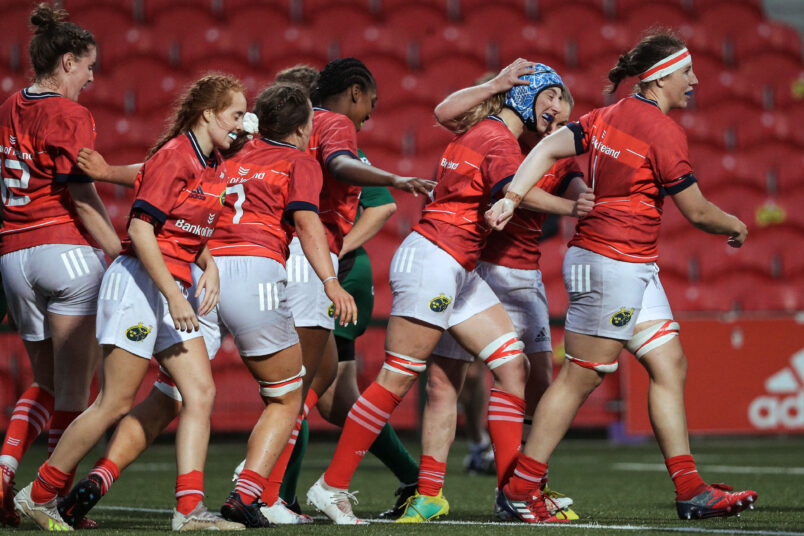 Munster recorded their second bonus-point win of the Vodafone Women’s Interprovincial Championship after they produced an excellent second-half performance to emerge 31-7 victors and set up a mouth-watering clash with Leinster in Dublin next weekend.

There was very little separating the sides throughout the majority of this game as Connacht’s resolute defensive effort frustrated Munster with the sides level 7-7 up until the 58th minute.

That was until the home side scored three quick-fire tries as Nicole Cronin, Stephanie Nunan and Deirbhile Nic a Bhaird crossed the whitewash to add to Clodagh O’Halloran’s first-half effort to give Munster some breathing room as the match entered the final 10 minutes.

Aoife Doyle got Munster’s fifth try on the stroke of full-time to cap off an impressive Munster performance.

Just like in the Kingspan Stadium last Saturday, Munster were quick out of the traps with a Muirne Wall break up the near touchline bringing play up to the Connacht 22. Maeve Óg O’Leary followed up with a strong carry before Matt Brown’s side went through the phases and edged closer to the the Westerners’ line before Player of the Match Clodagh O’Halloran weaved her way through an overstretched Connacht defence to touch down.

Connacht responded almost immediately on the restart as they brought play to just outside the Munster 22 before Ursula Sammon powered through a gap in the Munster defence to touch down under the posts. The conversion was a formality as the visitors levelled the game with just six minutes on the clock.

Both sides enjoyed periods of possession in the first half but the difficult conditions in addition to strong defence from both team saw attacks break down regularly.

Just before the first half water-break, Munster were inches from the Connacht line but the visitors were able to hold up the Munster ball-carrier and force a turnover much to the frustration of the home side.

Connacht were reduced to 14 as Kate Feehan saw yellow for a high tackle but Munster were unable to capitalise as the sides went in level at the break.

Much of the third quarter followed a similar pattern to the first half as Connacht’s defence continued to hold out Munster. That was until vice-captain Nicole Cronin stepped up in midfield and ripped the ball from a Connacht ball-carrier. The Limerick woman then sprinted and weaved from her own half to score under the posts to put Munster ahead.

Her conversion gave Munster a 14-7 lead and the home fans in attendance were on their feet soon again as Stephanie Nunan danced her way down the near touchline to score in the corner.

That 19-7 lead increased further when Deirbhile Nic a Bhaird showed her 7s experience with some electrifying footwork and pace to score a try from her own half.

With a 26-7 lead entering the final few moments, Connacht pushed for a consolation score but they were unsuccessful as Aoife Doyle pounced on a sublime grubber kick from Nicole Cronin in the final few seconds to score in the corner and seal a 31-7 victory.

A second successive bonus-point victory sets up Munster nicely for their trip to Dublin next Saturday to take on Leinster in the final game of this year’s Women’s Interprovincial Championship.

Clodagh O’Halloran was named Vodafone Player of the Match.

Munster are top of the Women’s Interprovincial Championship table thanks to their two bonus-point wins.