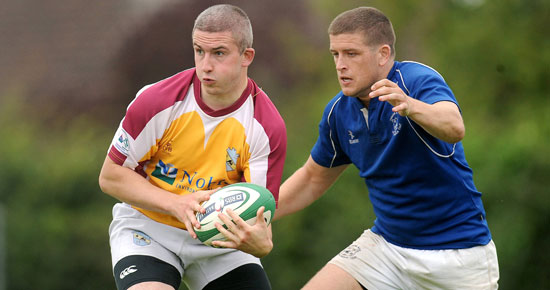 Mixed weekend for Munster Clubs in the opening round of the AIB All Ireland Cup with defeat for the four Cork clubs but the other four sides in action all qualified for Round Two.

Old Crescent who were the only Munster side to face a journey outside the province made it a winning one with a 27-17 victory over Rainey Old Boys at Magherafelt. Keith Ellis, Emmet Dalton and Barry Lynch were try scorers for the winners with Mark Woods kicking three conversions and two penalties.

There were two local Division Two ties. A hatrick of tries by Thomond winger Darragh O’Neill helped Thomond to a 17-15 win over Highfield at Woodleigh Park. The first two were intercepts on the Thomond Twenty Two and the third came when he squeezed in at the corner after a great back line movement to give his side a 17-0 lead after twenty eight minutes. Ger Finnucane kicked a conversion.
Highfield hit back in the second half with tries from Peter Martin and Paul Matson and a conversion and penalty by Colin Mahony but the visitors held out for a vital victory.

Bruff got the better of Clonakilty at The Vale with a 26-16 victory. The visitors led 16-13 at half time and were well in control in the second half. Brian Carroll scored twenty one of his side’s points with a try, two conversions and four penalties. Cathal O’Regan also scored a try for the winners. Kurt Morath replied with try, conversion and three penalties for the home side.

Nenagh Ormond recovered from their shock exit in the ODM Munster Senior Cup with an impressive 24-5 home win over Portadown. Michael Kennedy, Paul O’Brien and S Carey were try scorers for the Tipperary side and Steven Harvey kicked two conversions and also scored a try.

A late penalty by Niall Earls denied Midleton victory in their home tie with U.C.D. with the Dublin students winning 19-16. The home side led 10-9 at half time with a try from Gary Colbert and a conversion and penalty by Jeff Hitchmough with Earls kicking three penalties for the visitors. John McGinley who came in as a replacement put U.C.D. ahead with a try which Earls converted. Hitchmough levelled with two penalties before Earls late strike.

Second Division Malone proved too strong for Sunday’s Well at Musgrave Park emerging 16-10 winners. The Belfast side did all their scoring in the opening half with a try from Stuart Wilson and a conversion and three penalties by Josh Pendleton. The home side came back into contention after the break with a try from Rory Geary and a conversion and penalty by John Verling.

Young Munster won the Limerick Charity Cup final at Thomond Park for the twenty first time with a dramatic late win over U.L. Bohemian 21-20.
The winners led 3-0 at half time with a penalty from Alan Kingsley. Fergal Lawler tied the scores with a penalty and a try by Martin McPhail which Edwin Torrie converted put Bohes ahead. Aaron Carroll kept “The Cookies” in contention with a try and a late penalty from Kingsley gave Munster’s victory.