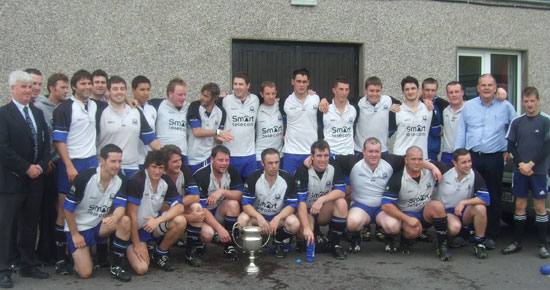 There were no shocks in the three major Junior Cup competitions that took place over the weekend.

Holder’s Cashel are through to the quarter finals of the Munster Junior Clubs Challenge Cup after they defeated Tralee 15-10 at the Kerry venue. Three penalties from Darragh O’Brien had Cashel 9-7 ahead at half time. Chris Dermody scored a try for the home side and Kevin O’Shea converted. O’Brien and Gareth Walsh exchanged penalties early in the second half and a drop goal from Conor Quinlan made sure of victory for the Tipperary side.

Richmond proved too strong for Thurles running in five tries in their 33-7 home win against Thurles. The winners had two tries from Jody O’Sullivan and Brian Begley, Michael Gallagher and Finbar Hogan got one apiece. Begley kicked a conversion and penalty and Wayne Murphy also added a penalty.

There was no joy for the two promoted clubs to the First Division as both lost. Ballincollig lost at home to Skibbereen 39-20. Jimmy Fraser and Maurice O’Keeffe scored two tries each for the winners and Declan Coppinger, Andy McCarthy and Mark Kingston also crossed the line. Fraser converted two of the tries. Dave Power scored two tries for Ballincollig and Dara Lancaster and Fergal Twohig got one each.

Clonmel defeated St Senan’s 24-3. Paddy Long and Padraig Leahy scored tries for the winners and Morgan Lyons kicked a conversion and four penalties. Frank Duggan kicked a drop goal for the Clare side.

Bandon’s poor run continued when they lost 27-3 away to Kinsale in the First Round of the Munster Junior Clubs Challenge Shield. Kevin Brophy had given Bandon an early lead with a penalty but once Jason Murphy tied the scores there was only one side in the game. Edward Lemarie put the home side in front with a try before the break and Murphy converted for a 10-3 lead. Two tries by Tadgh Wright and a penalty and two conversions by Murphy completed the scoring.

Kanturk overcame Muskerry 24-15 to set up a quarter final tie in Kinsale next week. Ned English, Malcolm O’Leary, Luke McCabe and Gary Pigott were try scorers for the winners and Dara Meade kicked two conversions. Muskerry replied with tries from Darren O’Farrell and Timmy Keating and Eoin Keohane added a conversion and penalty.

Old Christians will face Newport in the last eight after their 29-19 win over St. Mary’s at Corbally. Saia Mafi and Gavin Murphy were try scorers for the Rathcooney side and Aidan Tobin kicked two conversions and five penalties. Darragh Fitzgerald replied with a try for the home side and Barry Gibbons kicked a conversion and four penalties.

Two late tries earned Newport a 22-10 away win over Newcastle West. A try by James Kelly which Tom Kelleher converted had Newcastle West 7-3 ahead at half time. Philip O’Brien kicked a penalty for the visitors. Tom Ryan scored a try for Newport and O’Brien converted to give his side the lead but Kelleher levelled with a penalty. Than came the Tipperary side’s late surge with tries from Tom Ryan and Shane Ryan and a conversion by O’Brien.

The Martin O’Sullivan Cup is down to the last four after yesterday’s quarter final ties.
Abbeyfeale defeated Corca Dhuibhne 11-10 at Ballydavid. Paul O’Sullivan scored all the points for the winners with a try and two penalties. Ciaran Collins scored a try for the West Kerry Gaeltacht side and Johnny Curran kicked a conversion and a penalty.

Abbeyfeale’s reward is a home tie against Mallow after the North Cork side defeated Castleisland 28-24. The winners raced into a 17-0 lead but had to withstand a late rally from the visitors. Player Coach Brian Morris scored two tries for the winners and he converted both and also added a drop goal and two penalties. Dave Walsh also scored a try for Mallow. Kevin Lyons, William Walsh and Jamie McCarthy scored tries for the Kerry side and Mark Connelly converted all three and also added a penalty.

The other semi final will be between Carrick-on-Suir and Waterford City. Carrick’ just edged out Killorglin 13-10. Jim Wallace scored all the winner’s points with a try, conversion and two penalties. Danny O’Sullivan scored a try for the visitors and Brian Gannon kicked a conversion and a penalty.

Waterford City defeated Charleville 20-16 at the North Cork venue. A try by John Doran and a conversion and penalty by Aaron Foskin had the visitors 10-6 in front at half time. Shane Corkery kicked two penalties for Charleville. A try by Alan Howard which Corkery converted gave the home side the lead bur Foskin levelled with his second penalty. Corkery put the home side back in front but a late try by Jason Power converted by Foskin sent the Suirsiders through to the last four.

Cork Constitution won the Dennehy Cup for the eighteenth time with a 21-17 victory over Highfield at Woodleigh Park. Brian O’Hea opened the scoring with a penalty for the home side after five minutes but Simon Barry had Constitution level four minutes later. Rory O’Sullivan put the Temple Hill side ahead with a try. But two penalties by O’Hea had Highfield in front by the narrowest of margins at half time. Barry and O’Hea exchanged early penalties after the break. Billy Newman restored Con’s lead with their second try which Barry converted. Barry extended the lead with a penalty but Highfield were on top for the final ten minutes but all they could muster was a try from Stephen Daly.

Crosshaven had a narrow 12-11 win over Ballincollig at Tanner Park. Guillanme Lereun and Chris Lordan scored tries for the winners and Ken O’Halloran added one conversion.

Munster Schools in the Sportsground