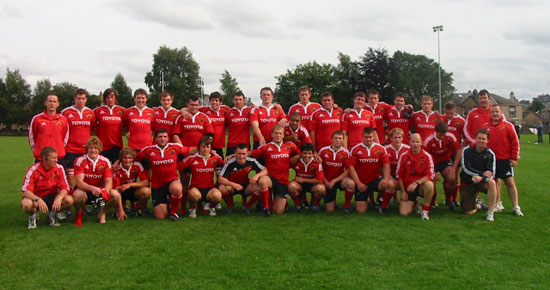 With three underage representative sides in action over the weekend, the U20s were the only side to come away with a win.

First up was the Munster U19 Club side on Friday evening, and they lost to Ulster 20-9.

The U20s in action next finished their Interprovincial campaign on a high defeating Ulster 22-21.

The Munster Youths were away to Leinster today in Donnybrook where they suffered a heavy defeat, losing 39-0.

The opening ten minutes saw Ulster failing to covert a penalty opportunity and Munster touching down for a try from inspirational number eight on the day Paddy Butler, converted by Cormac O’Flynn.

Ulster once again missed an opportunity to get on the scoreboard on the 13th minute as James McKinney kicked wide for the second time.

Cork Con’s Simon Zebo in impressive form in the Munster backline crossed over for his first of two tries on the 18th minute, O’Flynn once again adding the points.

Ulster were not deterred and responded well with a try from winger Jeremy Nash. At 14-5 after 30 minutes Munster looked to be in total control when Zebo made it over the line for his second try pushing the visitors ahead to 19-5.

However it was the same again this week for Munster when they failed to put their opposition away. Ulster claimed the next few scores with a last minute converted try in the first half bringing the score to 12-19 at the break.

After the resumption James McKinney found his kicking boots and converted three penalties. But Cormac O’Flynn did just enough with the winning score coming from a drop goal in the 56th minute.

Both sides fronted a strong attack for the final quarter in the hope of producing scores to put the match out of reach. Munster were fortunate that no other penalties were conceded and with no clear scoring opportunities arising, the game closed out 22-21 in favour of Munster.

As the U20s Interprovincial campaign came to an end Munster Manager Alan Miller wished to thank the following people, the coaching and management team of Anthony Foley, Ian Costello, Alan Hickey, Fergal O’Callaghan, Paudie Roche, Damien Mordan and Elliot Corcoran; the players in the original and extended squad, in particular the reduced squad for their professionalism, commitment and dedication to hard work; John O’Dea the Team Doctor; the parents of all the players who attended the games both home and away in such large numbers; the team services department and in particular Ultan O’Callaghan, Cliona Quaid and Ian Fleming; Joe Lawlor Coach Hire for the coach requirements; Herlihys in Fermoy and Mallow for our post training food packs; Charleville RFC and groundsman John Tuohy, and Fermoy RFC and groundsman Eamon Hickey for providing excellent training facilities.

“On a final note I wish the players every success in their future rugby careers and in particular I hope a number of the players will secure academy, sub academy and Ireland U20 positions."