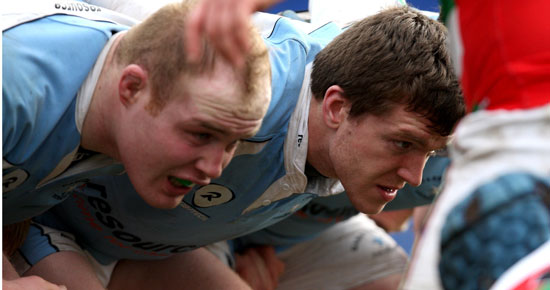 With the weather causing chaos to the rugby program it will be fingers crossed that the majority of games will go ahead this weekend especially as the various leagues enter the closing stages.

With five of the six Munster sides in the top half of Division One in the AIL, the weekend games will be very crucial.

The big game should be the Limerick derby tie at Dooradoyle, where Garryowen host U.L. Bohemian. Both these sides are outside the top four and a defeat for either side would be a set back in their efforts to finish in the top half of the table. It should be close with Garryowen’s experience likely to give them the edge.

Second placed Dolphin are on the road for a second successive week when they face bottom side Terenure and if they continue their current form they should at least hold on to second place.

Shannon will fancy their chances at home to struggling Dungannon and the same applies to Cork Constitution who face Buccaneers at Temple Hill.

Young Munster’s welcome St Mary’s College to Clifford Park and they will have their work cut out in their bid to move out of the relegation zone.

In Division Two U.C.C. play Bective Rangers at the Mardyke in their colours game and this has a 3.15 kick off. The students disappointed that they will have to play Wanderers again as per the rules of the competition, will not have it easy against the Donnybrook side who are two points behind them in the table.

Bruff who occupy second spot, travel to Wanderers and despite the Dublin’s side lowly position, they can expect a stiff challenge from the Merrion Road outfit.

Thomond boosted by last week’s win over Instonians travel to Belfast Harlequins. The Ulster side have slipped alarmingly down the table in recent weeks and the visitors could cause an upset.

Old Crescent’s promotion hopes received a set back last week by that defeat by Bruff and they will be confident of returning to winning ways against Clonakilty at Rosbrien. Last week’s defeat by Lansdowne has seen the West Cork side slip into the relegation zone.

Highfield will be hoping to move further up the table with a victory over Trinity at College Park, following last week’s success against Malone.

In the Third Division Midleton must collect the points away to Banbridge after they slipped to fifth place after their defeat by Co. Carlow.

Nenagh Ormond should ease their relegation worries with a victory against Rainey Old Boys at Magherafelt. However both Sunday’s Well and Waterpark who occupy the bottom two places face difficult tasks, the ‘Well face leaders Queens University and Waterpark travel to Old Wesley.

In the AIB All Ireland Junior Cup Crosshaven will make a third attempt to play their game away to City of Armagh and will need to show a big improvement on recent form if they hope to face Cashel in the quarter finals.

Munster Junior League leaders Cashel face their last away tie in this year’s campaign when they travel to Skibbereen. The West Cork side will be all out to make amends for last season’s defeat, a result that decided the championship. A defeat for the defending champions would open up the race and Cashel will be expected to be at their best to secure the vital points.

Kilfeacle travel to Old Christians with the points vital to both sides. If Cashel lose, then Kilfeacle would be back in the race and the final game between the two Tipperary sides could be the deciding game.

The Rathcooney side also need the points as they try to avoid being sucked into the relegation zone, but Kilfeacle’s determination could see them come out on top.

Cobh Pirates travel to Thurles where a victory for either side would ease their fears of finishing in the bottom four.

Richmond entertain Tralee and with both sides in a mid table position a win would see either side challenging for a top four finish.

The two bottom sides Newport and Bandon meet at the Tipperary venue and a defeat for either side will almost certainly mean certain relegation.

In Division Two the top two sides face difficult away games. Leaders Ballincollig travel to Charleville and will have to be at their best to hold on to top spot.

St. Senan’s will be confident of taking the points at Ballyanly against Muskerry, but the Mid Cork side will make them fight to the final whistle.

Kinsale three points adrift of a promotion spot must see off the challenge of Mallow. The North Cork side are in grave danger of being relegated and will not make things easy for the home side.

Ennis travel to Clanwilliam and must win to stay in the promotion race. Newcastle West will hope to add to Abbeyfeale’s woes in the West Limerick derby and bottom side Youghal face a difficult test away to Kanturk.
.
In Section A of the Third Division, leaders Castleisland should maintain their unbeaten run with a home win over Scariff.

St. Mary’s should hold on to second spot with a win over Presentation at Rathuard and Kilrush should maintain their challenge at home to Kilrush.

In the other section the top two sides Carrick-on-Suir and Galbally will be favourites to maintain their challenge against Fermoy and Waterford City respectively, while Douglas will fancy their chances of picking up maximum points away to Dungarvan.

Other vital ties taking place will be the meeting of St. Munchin’s and PBC in the opening round of the Avonmore Milk Munster Junior Cup on Saturday, while there are two play off games in the Gleeson League when Old Crescent face Shannon at Rosbrien and Thomond have home advantage against Garryowen.