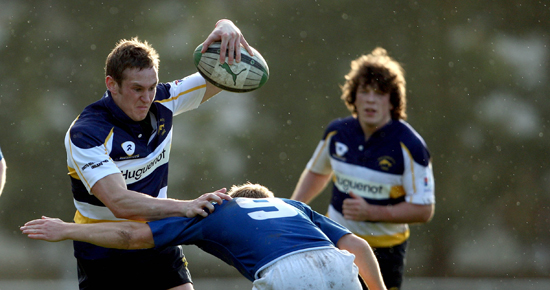 All the main club action will be played on Sunday with two games in the AIB All Ireland League and also the first semi final of the ODM Munster Senior Cup.

Garryowen and Dolphin meet in a vital game in Division 1 of the AIB All Ireland League at Dooradoyle. A win for Dolphin would see them move ahead of Cork Constitution into second place, while Garryowen would move out of the relegation zone with a victory. The Light Blues have already defeated Dolphin earlier in the season in the Cup and they will be confident of collecting some valuable points.

There is one game in the Second Division with Clonakilty playing hosts to Thomond. This will be Thomond’s third time travelling to the West Cork venue as on both previous occasions the referee cancelled the fixture.

Thomond will want to recover from last week’s heavy defeat away to Lansdowne, while Clonakilty know that failure to pick up points from this tie will not help their cause to remain in this Division. It should be a closely contested tie with little between them at the finish.

Shannon and U.C.C. go head to head at Clifford Park to decide who will reach the final of the ODM Munster Senior Cup next month. Shannon go into this contest in a confident mood after last week’s league win over St. Mary’s saw them go back to the top of the table. The students defeat away to Ballymena has probably ended their promotion hopes and it will be a tall order to expect the College to book a final place against the side that has dominated this competition for over the past twenty years.

It is all to play for in the First Division of the Munster Junior League with just three points separating the top three sides with three games remaining.

Crosshaven caused a big shock last week with that 6-3 home win over defending champions Cashel and they face another difficult test away to leaders Tralee. The Kerry side faces a difficult run in and know this is a tie they must win to keep their hopes alive. Crosshaven still occupy a relegation place and must pick up a few more points if they are to remain in the top flight.

Richmond in second place a point behind the leaders must now be in a strong position to win their second title. They have a home game against Thurles and will be looking for a five pointer form this encounter. Thurles are not out of the danger zone at the foot of the table and they will be boosted by a fine performance against U.C.C. last week in the Cup and will not make it easier for the Limerick side.

Cashel seeking their third title face a tricky encounter away to neighbours Kilfeacle and cannot afford another slip up, but may have their work cut out to get the points.

Cobh Pirates entertain bottom side St. Senan’s and a win for the Pirates would almost condemn the Clare side to the Second Division next season.

Clonmel host Waterpark and after their great cup win over Tralee last week, Clonmel will be confident of picking up the points.

The other tie in the top flight sees Ballincollig at home to Skibbereen and the home side will want to bounce back after two heavy defeats.

Three sides are battling it out for the two promotion places in the Second Division. Leaders Clanwilliam are away to relegation threatened Ennis. The Clare side caused a big shock with 45-0 home win over Old Crescent in the Cup last week and desperately needing points to avoid the drop could make it difficult for the leaders.

Second placed Old Christians are at home to Kinsale and they are the form side at the moment and will be primed to take the points.

Galbally have bounced back from their first defeat of the season by Old Christians and will be confident of picking up the points when they travel to Bandon.

At the other end of the table bottom side St. Mary’s will be hoping to break their duck with a home win over Muskerry.

Kanturk travel to Youghal for the second successive week and while the home side desperately need the points, they may not have it as easy as last week when a good opening half saw them knock Kanturk out of the Cup.

Newport play hosts to Newcastle West and the home side should pick up the points in this mid table clash.

Section A leaders in the Third Division Castleisland will be strongly fancied to make it ten wins out of ten when they travel to Kilrush.

The main interest in this section is the race for the second spot. Killarney currently in second place will fancy their chances away to bottom side Scariff.

Corca Dhuibhne still in with a chance of booking a semi final place travel to Killorglin and the home side will be all fired up to record their third successive win of the season.

Presentation in third place must collect the points away to Abbeyfeale if they are to keep their hopes alive of promotion.

In Section B the top two sides go head to head when leaders Charleville travel to Mallow. The home side have gone on a good run since they lost the reverse fixture back in November, while Charleville will want to bounce back after last week’s defeat by Douglas in the Junior Plate.

Fermoy travel to Douglas and a defeat for either side will almost certainly end their promotion aspirations for another season.

Both Carrick-on-Suir and Waterford City will be expected to pick up the points with home wins against the bottom two sides Shandon and Dungarvan.