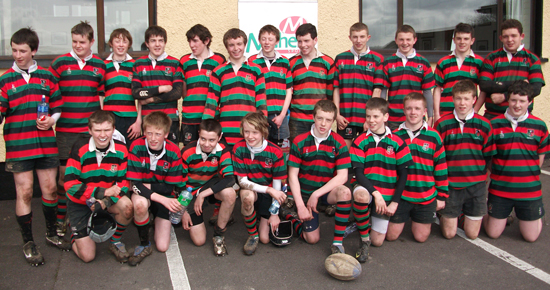 The final series of games in Division Two of the Munster Junior League produced plenty of drama as Clanwilliam snatched the title with an injury time try.

Old Christians went into this top of the table clash already assured of promotion and just had to avoid defeat to win the title. They led 13-5 at half time with a try from Stuart Lee and a conversion and two penalties by Aidan Tobin. Ian Quinlan scored a try for the home side.
Four minutes from time Bernard O’Callaghan scored a try for Clanwilliam and with the final play of the game after twelve minutes of injury time, Vivion Grisewood got in at the corner for a try for the home side to confirm their promotion to the top flight as Second Division champions.

Meanwhile at Galbally the County Limerick side needed to beat St. Mary’s and hope that Clanwilliam would not gain a victory and that would have seen them promoted for the second successive season.
Mary’s took the lead with a penalty from Barry Gibbons but tries from Niall McNamara and Danny Hayes and a conversion and two penalties from Liam Casey gave Galbally an 18-3 victory.
When the final whistle sounded Galbally knew that Clanwilliam were losing but when the final result came through their promotion hopes were dashed.

This result also meant that Mary’s would be relegated if either Ennis or Youghal won their games.

This left it between Ennis and Youghal to see who would be joining them in the Third Division.
A penalty by David Murphy gave Ennis a 3-0 interval lead away to Newcastle West. Diarmuid Crowley scored a try for the home side but a second penalty and drop goal by Murphy saw the Clare side come out on top 9-5.

Youghal defeated Newport 41-3 with two tries from Gareth Horgan and one each from Ken Forrest, John Brosnan and Alan Frahill-O’Connor. Jonathon Ormond converted all five tries and kicked two penalties.

This left Ennis and Youghal level on points but a decision of the Munster Junior Committee to implement a rule of the competition to deduct Youghal four points for failing to fulfill a fixture meant that it is Youghal and not Ennis who are relegated. Youghal are unhappy with this decision and may take the matter further.

Kanturk and Kinsale finished their program with big victories. Kanturk completed their preparations for next week’s Junior Challenge Shield Final against Galbally with a 54-18 home win over Muskerry. Simon Mulholland scored three of the winner’s eight tries. John Duggan, Dara Lyons, Pat Fitzgerald, Malcolm O’Leary and Dara Meade were the other try scorers with Meade kicking seven conversions. Barry Jones and JJ Herlihy replied with tries for the visitors. Pat Dennehy kicked a conversion and penalty and D.J. O’Leary added a drop goal.

Kinsale defeated Bandon 39-15 to finish fourth. The home side scored six tries with Edouard Brouard-Lemaire getting two and Peter Murphy, Frazer Hodgson, Tadgh Wright and Shane O’Regan one each. Murphy kicked three conversions and a penalty. The visitors replied with tries from James Lyons and Mark O’Driscoll and a conversion and penalty from Sean O’Riordan.

Killorglin put a big dent in Killarney’s promotion hopes from the Third Division with a 16-11 home win. Two tries from Kieran Crowley and two penalties from John Ahern gave Killorglin the points.

A weakened Castleisland side lost their unbeaten record at Rathuard where Presentation came out on top 22-14.

Abbeyfeale kept their promotion hopes alive with a 23-5 away win over Scariff. Robert Brown, David Prendeville and Michael Enright scored tries for the winners. Prendeville kicked a drop goal and Brown added a conversion and penalty. Darren McNamara scored a try for the Clare side.

In the other game in this section Kilrush defeated Corca Dhuibhne 7-5. Paul Conway scored a try and conversion for the winners.

Charleville and Mallow will be the two sides to qualify for the semi finals from Section B. Charleville finished their campaign with a 55-0 away win over Shandon. Tony Moffat scored three tries for the winners, James Leahy got two and Matt O’Neill, Peadar Cronin, Damian Leahy got one each. Frankie Holly kicked six conversions and a penalty.

Mallow defeated Douglas 35-3 at Moneygourney. Neill Lucey and Bobby O’Gorman scored two tries each for the winners. Rory McSherry also scored a try and Brian Morris kicked two conversions and two penalties. Andy Larkin replied with a penalty for the home side.

Dungarvan ended Fermoy’s outside hopes of promotion with a surprising 12-9 victory at the North Cork venue. The sides were scoreless at half time, Joe Lee kicked three penalties for Fermoy and Dungarvan replied with two tries from David O’Riordan and a conversion by Michael Irwin.

Waterford City defeated Carrick-on-Suir 22-3. Mick Costello scored two tries for the winners and Lennie Power and Damien Kennedy got one each. Aaron Foskin added one conversion.

Richmond showed their strength in depth when they defeated Shannon 17-7 to win the Gleeson League Final. Ger McCarthy scored a try for the winners and Darragh Clancy kicked a conversion, three penalties and a drop goal.

Waterpark overcame Galbally 35-5 to advance to the next round of the Webb Cup. Collie Walsh scored three tries for the winners and Pat Fahy and Collin Higgins got a try each. Richard Halley kicked four conversions and Niall Gilhooley one. Danny Hayes replied with a try for the visitors.

Cobh Pirates began their Junior Two Cup South campaign with a 38-0 away win over Castleisland. Tadgh Hawes and Donnacha O’Donovan each scored two tries for the Pirates. Tom Rice and David Lamb got one each. Ian Jones kicked a conversion and Conor O’Regan added three conversions.

Cork Constitution defeated Clonakilty 20-12. Dave O’Brien, Brian O’Leary and Kevin Minihan were try scorers for the winners and Simon Barry added a penalty and a conversion. Phelim O’Neill and Cian Clancy replied with tries for the visitors.

Tries by Brian O’Leary, John Kelly and Paul Boylan and a try and three conversions by Harry Lane gave Sunday’s Well a 26-0 away win over Muskerry.

Mallow defeated Ballincollig 28-14 in the semi final of the McCarthy Cup. Billy Myers, Anthony Barrett, James Fitzgerald and Trevor Costello all scored tries for the North Cork side and Conor McCarthy kicked two penalties and a conversion.

Holders U.C.C. advanced to the semi final of the Under 21 Cup with a 17-3 win over Cork Constitution. A try by Andrew Cudmore and a penalty try and two conversions and a penalty by Johnny Holland were the student’s scorers. Darragh Dunne replied with a penalty for the home side.