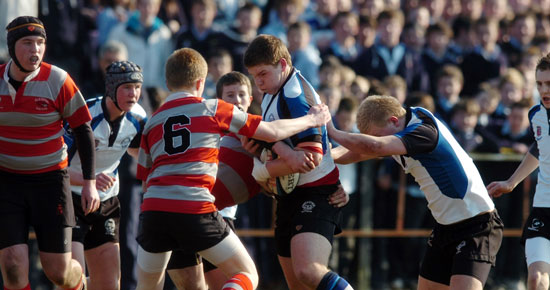 C.B.C. will start as favourites and have been very impressive to date. They opened their campaign with a 22-0 win over Glenstal Abbey and then produced a top class performance to knock out holders and arch rivals P.B.C. 31-10. They booked their place in the final with a hard earned 12-8 win over Ard Scoil Ris.

Chris McAuliffe has proved very elusive on the wing for the Cork College and scrum half Ryan Foley looks like a player to be watched for the future. Skipper Charlie Slowey gets the best out of his pack and he will hope to make amends for last year’s failure not to lift the trophy.

Christians last success was back in 2006 but Crescent have not lifted this trophy since 1991.

Crescent opened their campaign with 15-10 win over P.B.C. and followed it up with a 7-0 win over Rockwell and then defeated Glenstal 20-13 in the semi final.

Diarmuid Dee, Jack Dinneen and John Sheehan have been very prominent in the Limerick side’s run to the final. Greg O’Shea has been excellent with the boot and they could cause a major upset.

The game will be refereed by Darragh McCormack (M.A.R).