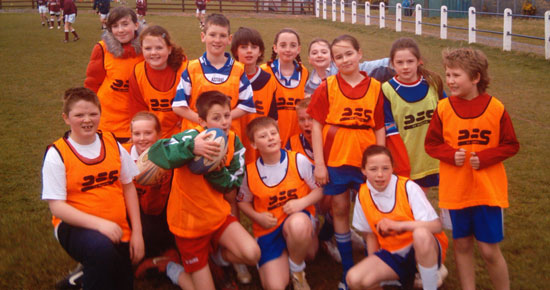 The Munster Coaching and Development Office recently held the Waterford Primary School Tag Rugby Extravaganza to encourage more participation of young players in rugby, and to continue the growth of the game. Waterford City R.F.C hosted this extravaganza at their grounds in Kilbarry on Thursday morning 13th March.

The tournament is based on Fair Play, Sportsmanship & Participation with the onus on all players to enjoy themselves and take part. This was the first time the event was held in Waterford. The 15 schools represented Waterford City and County, with boys and girls taking part, and the day was a great success with over 280 participants.

Each school was allocated a country to represent and carried banners of their country. In the dress parade prior to the tag blitz, judging of the schools took place and schools were awarded according to their representation of their nominated country. This was a most colourful display.

The tournament draw created three sections with each school playing four games. Points were awarded in the following manner: 5 for a Win, 3 for a Draw, Teamwork (5 max), Good Conduct (5 max) and Sportsmanship (5 max). There were over 72 games played on four pitches and the skills shown by all players were an eye opener for all in attendance.

This tournament clearly showed that Tag Rugby is a sport that can be enjoyed by all Boys and Girls. It provides each, the opportunity of been part of a team, and permits each player to show their skills and commitment to their team. Most important is that all the participants had fun, and mingled with their opponents. "Fair Play" was evident throughout the day with opposition teams shaking hands win or lose!

Of course the day would not have taken place without the support of the Teachers, who during the games could be heard shouting encouragement to their teams. There were times that they wanted to go out and play themselves, all in the fun of the competition.

Overall winners: St. Declan’s Waterford.
The prize received by them will enable the school to develop their physical education facilities.

Overall it was a great day enjoyed by all, and all the schools who participated must be congratulated for their efforts.

Thanks also to Waterford R.F.C, for the contribution of their excellent facilities, and their members support was vital to its success.

A special Thank You to Sarah from Browne’s Soups, Tipperary, for their sponsorship of the Hot Soup on the day. It was needed and enjoyed.

Ireland U18’s through to Final for Second Year Running