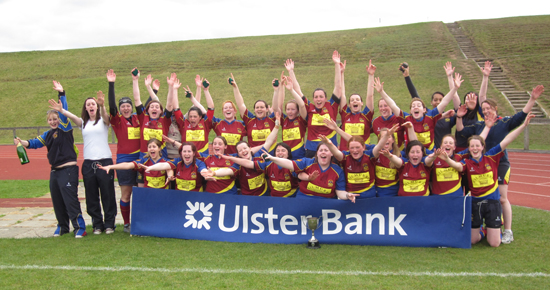 The rugby varsities took place in the University of Limerick over two days on the 7th and 8th of April in glorious sunshine with Munster sides UL and IT Tralee claiming the silverware.

Ten teams divided into division 1 and division 2 from colleges all over Ireland took part with Munster represented by CIT, UCC, WIT, IT Tralee and UL.

The league section of the competition took place on the first day before the play offs and finals.

IT Tralee contested the Division 2 title against UUJ. Tralee lead by captain Leah Dorrian raced into a 12-0 lead before UUJ played their way back into the game with 2 unconverted tries but the final say landed with the Munster side who scored a winning try to leave the score 17-10 to IT Tralee.

The Division 1 final saw UL go head to head with NUIG. Early exchanges in the game saw the teams testing each other out playing a large amount of the rugby between either 22 before UL out half Anna Caplice broke the dead lock with an excellent line break finishing near the posts.

UL began to cut loose with speedster Aisling Hutchings adding a further 4 tries the most notable an excellent chase onto a kick into space which the fullback claimed scoring under the posts. Centre Maria Moran contributed three tries with the very reliable boot of Sarah Jane Cody providing 5 conversions leaving the final score 50-0 .

Ireland International and ex University of Limerick player Rosie Foley was on hand to present the trophies to the winning sides ending two fantastic days of rugby in UL.