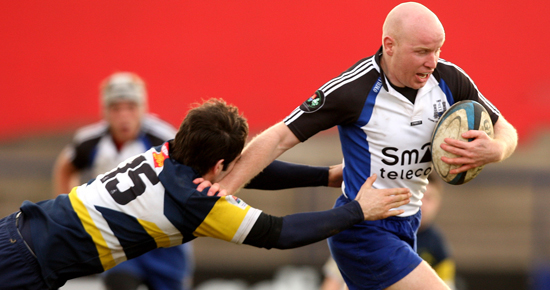 It is the business end of the season in the AIB All Ireland League with semi finals in all Three Divisions scheduled as well as the ODM Munster Senior Cup Final at Musgrave Park.

The main focus will be on the Division One semi finals. Cork Constitution host Dolphin for the second successive week.

Both sides are anxiously waiting which players Munster will require for the Magners League against Connacht next Sunday.

Dolphin were badly hit last week but it appears that the Temple Hill side could also be missing several players this weekend as Munster look likely to rest the majority of players involved in last week’s game against Northampton.

Constitution were deserving winners last week but may not have it as easy this time but should book their place in the decider.

The other tie is an all Dublin affair with St. Mary’s College starting as favourites at home to Old Belvedere.

This will be the last season of the Division Two and Three finals and no doubt this will be welcome by all clubs in these Divisions. With these finals scheduled for Anglesea Road on Friday 6th May, Munster clubs may not want to take part due to the problems this would cause in getting players off work etc.

The Second Division semi final sees Bruff at home to Terenure College and the Limerick side on current form should come out on top and have another tilt at Division Two champions Lansdowne who face DLSP in the other tie.

It is an all Ulster and Munster pairing in the Third Division. Midleton host Nenagh Ormond in what should be a closely fought tie with the side with the appetite for a final appearance likely to advance to a meeting against Queens University who face Banbridge in the other semi final tie.

The eagerly awaited ODM Munster Senior Cup Final between U.C.C. and Young Munster goes ahead at Musgrave Park this Saturday with a 4.00 start.

Both sides will want to lift this prestigious trophy. College’s last success was back in 1981 while the Trophy last went to Clifford Park in 1990.

Munster’s got the better of the students in their two league meetings this season by narrow margins and if College can field a near full strength team than they should get the better of the Limerick side and make amends for those defeats.

Richmond complete their AIB All Ireland Provincial League campaign with a trip to City of Derry and with no chance of making the play offs, the Ulster sided will be expected to come out on top.

The two semi finals of the Munster Junior Plate are down for decision this weekend. Kinsale the only non Senior club side left in the competition face a difficult tie at home to Garryowen but having beaten Thomond 22-15 in the last round Kinsale will be looking for a repeat performance and cause another upset.

Highfield are at home to Dolphin in the other semi final and after their 28-21 win over Kilfeacle last week Dolphin should shade this tie.

Fermoy and Newport meet at Musgrave Park in the Munster Junior Bowl final. This will be the Tipperary side’s first visit to Musgrave Park and having played in a higher division this season they will start as favourites to lift the trophy.

The final of the Third Division of the Munster Junior League is an all Kerry affair after Castleisland and Killarney secured promotion last week with wins in the semi final. Castleisland will start as favourites to win but Killarney will have received a big boost by that away win over Charleville last week and could give their neighbours a good run.

U.L. Bohemian face U.C.C. in the semi final of the Munster Seconds League at Annacotty. The Limerick side who are going for the double have already beaten the Cork students 39-12 in the Munster Junior Cup.

Skibbereen play Old Christians in the semi final of the Cork County Cup and home advantage should see the West Cork side advance.

Charleville host Muskerry and should bounce back to winning ways after last week’s defeat by Killarney. Kinsale await the winner’s in the other semi final.

Kanturk entertain Crosshaven in the O’Neill Cup semi final and after their 44-10 away win over Bandon last week, Kanturk should advance to a final meeting with Douglas.

The meeting of the Gleeson League semi finalists and the South Munster Junior Two League qualifiers kicks off this weekend.

Webb Cup holders Cashel have home advantage against Clonmel and should book their place in the final with a victory.