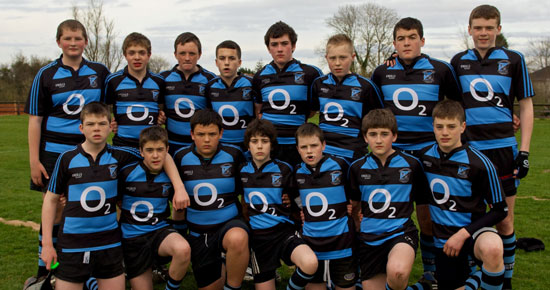 On Thursday night last in Coonagh, the U/14’s of Shannon and Old Crescent played out a league final with more than its fair share of thrills along with some superb rugby from both sides.

Right up to the final whistle either side could have won this final, but as Old Crescent tried valiantly to claw back the 17-10 deficit, Shannon defended the gain line with such authority, organisation and passion that one feels that the Munster team would have difficulty in breeching.

Whilst Old Crescent can be very proud of their supreme efforts in a game that saw little between the sides, it was Shannon’s evening and their victory was thoroughly deserved.

A blistering start from Shannon saw Captain Shane Fenton lead the attack and score his side’s early 10 point tally. First came a penalty and then with the early momentum in his sides favour, Fenton burst over the try line for a converted try.

It was a start that Shannon could scarcely have imagined, but any illusions of a facile victory were soon dismissed as Old Crescent soon displayed all the traits that ensured their final spot. Not only did they claw their way back into contention, they were doing so with some gusto and Shannon had to be very vigilant for the remainder of the half. A deserved converted try for Old Crescent brought them to within one score of Shannon at the break and such was the confidence on show, it appeared as if the second half would see them take the lead. However, Shannon had plenty in reserve and a visible increase in their pace at the start of the second half ensured Old Crescent’s momentum was negated.

Up front, Shannon began to dominate the loose exchanges with Kelvin Brown and Mike Mc Gann to the fore, but Old Crescents stubborn resistance saw scoring opportunities few and far between. But at some stage the resistance would inevitably fail in the face of heavy fire and the impressive No.6 Kelvin Brown barged over for another Shannon try converted by Shane Fenton.

Old Crescent were far from finished and a penalty soon after ensured that the final period of the game would be played with supreme effort from both sides.

Old Crescent held advantage in the possession stakes, but Shannon held the upper hand in defence, but it was a defence that was severely tested. At one stage, as the drama unfolded Crescent looked odds on to get the outside line, but a superb Robbie Graham tackle, one of many, saw the danger averted.

Almost 5 minutes into injury time the referee blew for full time and celebrations could begin in earnest for Shannon while for Old Crescent it may be of little consolation that they played a fulsome part in a thrilling game.
The standard of rugby throughout was exceptional and both sides and coaches should take full credit.