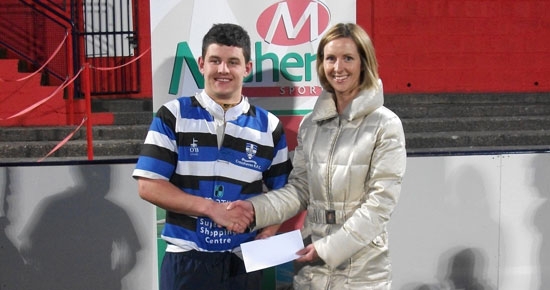 Crosshaven won the Maher’s Sports South Munster Under 19 Cup and kept their aspirations of the double alive as they defeated Sunday’s Well in a nail biting encounter at Musgrave Park with the lead changing hands on several occasions in a dramatic final quarter.

Maher Sports Man of the Match Cian McGovern was the main architect of Crosshaven’s victory contributing nineteen points of his side’s total.

With the ‘Well leading 18-16 at the game approached the final ten minutes Crosshaven upped the ante and after great work by the Crosshaven pack lock Ben Crumplin got in for a second try which McGovern converted for a five point lead.
McGovern looked like he had sealed victory with his fourth penalty six minutes from time.

However the Well rallied and centre Ian Ryan got in at the corner for a ‘Well try which Dave O’Gorman converted. Back came the ‘Well and after great work by the forwards a drop goal by out half Eoin Philpott put the ‘Well in front by two points, but this lead did not last long. McGovern was off target with a drop goal effort but kicked his fifth penalty with the last kick of the game to ensure that his side had secured the first leg of the Double.

A try by Christian O’Donovan and a conversion and three penalties by McGovern gave Crossahven a 16-11 lead at half time. Paul Quill scored a try for the ‘Well and O’Gorman kicked two penalties.

The ‘Well took the lead three minutes after the restart when the ball was spread out to tight head prop Jack O’Connell for a try following a five-metre scrum, which was converted by O’Gorman to give the Musgrave Park side an 18-16 advantage.

But than came Crosshaven’s dramatic finish as they now look to beat Highfield in the League final next week.