U18 Six Nations Festival Weekend Round Up 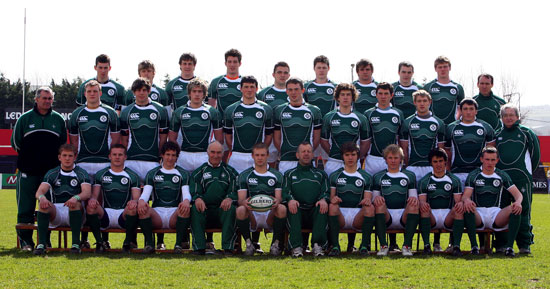 Wins for Scotland, England and Wales in their Round Two U18 Six Nations games played on Saturday in Cork.

Ireland’s final game of the U18 Six Nations Festival against Italy will be played at Cork Institute of Technology at 2.30pm on Tuesday, April 1st, and not at the Mardyke as previously advertised.

Ireland suffered a second loss at the U18 Six Nations Festival as they went down to the Scots at Musgrave Park.

Scotland got off to a good start when Alex Blair put three points on the board just a minute in but Ireland’s start got better when some strong runs from number 8 David O’Callaghan and winger Michael Allen won them some good territory.

Noel Reid struck a penalty after five minutes to level things up however Blair’s fine start continued when he picked a perfect line inside Ireland’s 22 to touch down the first try and his conversion gave Scotland a solid 10-3 lead.

Allen was involved again as Ireland put together some good attacking play but Scotland scrapped well on the ground to force a number of turnovers.

Ireland had plenty of possession but Scotland’s defence was well organised and the home team found a breakthrough almost impossible.

Scotland’s tally was increased when Blair added another penalty after Ireland killed the ball and centre Michael Kelliher was sent to the bin.

Scotland made the most of their numerical advantage when Blair notched another converted try after a fine display of offloading involving captain Stuart McInally and outhalf Ross Aitken.

Blair was forced off injured in the 34th minute after making a 20-point contribution and on came Matthew Tait, the son of senior Scottish backs coach Alan, who has been in the Scots U18 coaching camp this week.

Ireland finished the half strongly with Diarmuid McCarthy making some good ground out wide and skipper Brian O’Hara showing well but Scotland still led 20-3 comfortably at the break.

Ireland picked it up after the break with Michael Allen again providing the pace out wide and when Scotland captain Stuart McInalley was binned for killing the ball, the home team pressed hard for a score.

Reid knocked over a penalty to get his side back into the game but Scotland made sure of the win when McInally got on the end of a sweeping move upfield and touched down to add five more points.

Scotland finished the game with 13 players when both Grant Gilchrist and Jason Hill were carded and Ireland finally made their advantage count when Gavin Nugent dived over after some good pack play.

England made it two wins out of two in Cork on Saturday as they beat France 18-0 in a tough game in the second round of the U18 Six Nations Festival.

Coming off the back of a massive win over Italy earlier in the week, England came into the game with plenty of confidence but with France seeking to make up for their opening loss to Scotland this was always going to be a tough outing.

England’s pack started the game in impressive form and forced France into some superb defending.

France provided a physical test for the English up front but out wide it was England who looked to have the cutting edge with Rory Clegg combining well with centres Andy Forsyth and captain Tom Cassons.

Their good start was rewarded when hooker Jamie George crashed over after a line-out catch and drive effort and Clegg added the extras.

The score remained at 7-0 at half time but England came out firing and Clegg knocked over a penalty to push the lead out.

France struggled to deal with some hard running from England’s midfield and when flanker Jacob Rowan finished off a penetrating move, it looked like England had made certain of the win.

Replacement out-half Freddie Burns did that when he came on and dropped a goal towards the end of the half.

England Coach Alex Sanderson said: "This was a good result even though I am slightly disappointed that we missed a few opportunities. The lads, however, stuck to the structure and our game plan and that paid off. I was also really pleased with our scrummaging and driving mauls against a good French pack.

"There’s one more game to go now against Scotland on Tuesday. Now, we have to regroup, see how the lads are and get ready for our final match which we will of course be hoping we can win to end our season on a high."

Wales continued their good run of form in the U18 Six Nations Festival with a convincing win over Italy at the Mardyke.

Though the scoreline suggests that this was an easy win for Wales, they were made to work hard for every score as Italy were much more competitive than they had been earlier in the week against England.

Wales though are a powerful side with plenty of skill out wide and when fullback James Loxton went over for a try after just a minute, it quickly looked like it would be another convincing win for the Welsh who defeated Ireland in their opening game earlier in the week.

Liam Powell added another try out wide and with the extras from Chris Lewis Pratt they took an early 14-0 lead. Italy though showed some good fight and the likes of hooker Andrea Manici came storming into the game and their good pack play saw outhalf Fillipino Michelini dash through the defence to score.

Wales got back into with another try, this time from flanker Morgan Allen but they leaked another try before the break when lock Paolo Stinchelli barged his way over the line.

Wales were more potent in attack at the start of the second half and early tries from Loxton, James Thomas and Ieuan Coombes really killed the game off.

Italy did themselves no favours when they had two players sent off following a scuffle and from there it was one-way traffic for Wales who added further points through Coombes again and Lewis-Pratt with the boot.

Wales coach Simon King said that he was pleased with the big scoreline.

"We made nine changes from last week and still managed to score 43 points so I have to be happy with that. Italy gave us a big physical challenge but it was good to see that we took the chances we created and we have players in this squad who take the opportunities they get and take some good scores. Two wins for us is good so far and we look forward to the last game."