The Joy and the Heartbreak 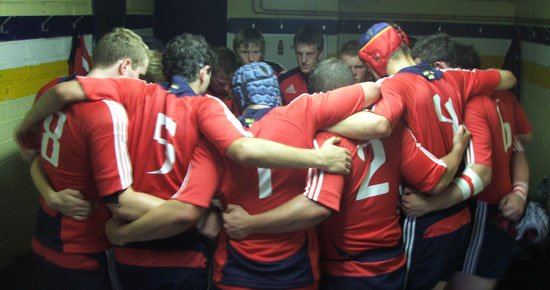 As the Munster U19 claimed the Interprovincial title over the weekend, it was hearbreak for the Munster U20’s who lost out on a place in the final after losing to Ulster by just one point.

Saturday September 15th saw the climax of the under 19 season, when the two unbeaten sides, Ulster and Munster went head to head in a winner take all clash in Civil Service Rugby Club, Belfast. And what a day to produce our best performance of the season. In excellent conditions and a pitch that most greenkeepers would be proud of, Munster outscored their opponents by two tries to one. Munster were always the more determined side and looked to take the game to Ulster right from the off.

Indeed Munster got the perfect start with winger Paul Gleeson touched down under the posts after Ulster infringed straight from the kick off. Conor Murray added the conversion and Munster were off to a flyer with a seven point lead after only 2 mins. However Ulster came back strongly and replied with two penalties from their outhalf. But despite this reply by Ulster, Munster finished the half much the stronger with two excellent penalties from outhalf Colm Downes. At half time Munster led 13-6.

Munster played into a strong breeze in the second half and initially held territory well, but as the half wore on a series of unforced errors allowed Ulster gain a foothold in the game. They capitalised and scored a well worked converted try to reduce the gap to 13-16 with ten minutes still on the clock. They say the sign of a good side is that it can produce good form at exactly the right time, and that is exactly what Munster did. It was time to produce a traditional Munster pattern by kicking to the corners and using the pack to dominate field position. Camped inside the Ulster 22 for the last 10 minutes, Munster produced a series of rolling mauls which saw tighthead Felix Ross crash over in the corner. His try was brilliantly converted by Com Downes from the touch line as the clocked ticked into injury time. Despite the referee allowing 8 minutes of injury time, Munster hung on to claim a famous victory. The celebrations started immediately, culminating in the singing of the Fields on the pitch.

The team have once again asked me to thank all the travelling support and express their appreciation for the support from parents and friends. On behalf of the management team, I would like to thank the entire panel for all the efforts thay put in over the last two months, all the hard work and long journeys between Cork and Limerick has well and truly paid off. I would also like to thank the coaching staff of Tommy Crowe, Conor Twomey, John Broderick, Mark Fitzgerald and Physio Conor Burke for their time and considerable input which made my job a complete pleasure.

Munster U20’s travelled to Ulster on Friday in need of a win, a four try bonus point and a superior point’s difference. At the end of the first half all these requirements appeared to be a real possibility.

Munster took to the field without their influential number 8, Kieran Essex, who was injured the previous week. Liam Murphy deputised and set the platform along with the other forwards to provide quality possession for their pacey backline.

Munster went on top from the start and Dave Foley scored a try on 8 minutes after several good phases of play with Scott Deasy slotting over the conversion. From the restart Ulster took possession and after several phases their out half Harry McAleese landed a drop goal. Munster got back on top and applied considerable pressure on the Ulster team for a sustained period and after 25 minutes Scott Deasy broke the Ulster backline to score a try which he converted himself. On 34 minutes Ulster landed a penalty leaving the score at 14-6.

Munster had been dominating the scrums and line outs and the key exchanges between the backlines. However, Munster received a devastating blow on 34 and 45 minutes respectively losing the tight head prop Stephen Archer to injury and scrum half Eoghan Kennedy, who had come on at half time as a tactical replacement for Diarmuid Upton. This resulted in Andrew Burke moving from out half to fill his totally unaccustomed role of scrumhalf.

Ulster took advantage and scored a converted try on 46 minutes leaving the score 14-13 in favour of Munster. Munster gradually clawed their way back into the game and on 67 minutes Richie Mullane scored a try wide out on the left which wasn’t converted.

Ulster camped themselves in the Munster half for the closing stages of the game. After 9 minutes of injury time Ulster broke through the Munster defence to score a try which McAleese converted leaving Ulster with a 20-19 win.

Munster’s final game is next Saturday at 2pm in Athlone were they compete for the 3rd/4th play off spot against Connacht.