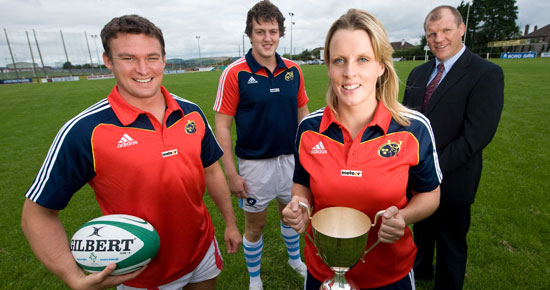 The Munster Branch have officially launched the third annual Meteor Munster Seven’s Cup. This year’s event will take place on Saturday 22nd of August in Highfield RFC, Cork City, between midday and 6pm.

Adding to the competition will be sixteen junior squads as well as seven ladies club teams taking to the pitches in their respective divisions.

Ultan O’Callaghan, Munster Rugby Provincial Domestic Game Manager, said “It is fantastic to see both Munster Rugby and Meteor coming together to support the domestic club game. Sevens rugby is an ideal platform for both adult retention and the talent development of provincial players. We look forward to showcasing the skill and ability that these players have to offer at this year’s Meteor Munster Sevens Tournament”.

Rugby Sevens was given a huge boost in profile last week when the International Olympic Committee (IOC) recommended its inclusion into the 2016 Olympic Games. A final decision will be made on October 9th when the IOC Congress meets in Copenhagen.

Commenting at the launch Amanda Carroll, Meteor’s Head of Communications, said “Once again we are proud to sponsor such a high calibre sporting event that recognises and supports the wealth of talent that Munster has to offer and who knows maybe some of the junior players will be lining up for the Irish Sevens team in the 2016 Olympics! Meteor has long been recognised as the competitive force in the mobile market, and we look forward to welcoming an equally competitive force to the pitch on 22nd August.”

There has been a significant increase in participation this year with over 70 matches scheduled and 30 referees needed to officiate the biggest Meteor Munster Sevens competition to date. In addition to the action packed schedule there is a host of family entertainment planned including a bouncy castle and a sizzling BBQ all accompanied by a live DJ playing all your summer favourites.

The event is also supporting the "Headsup" text referral service from Rehab Care, which aims to help young adults in difficulty by offering support group information for a range of issues via text on 50424.