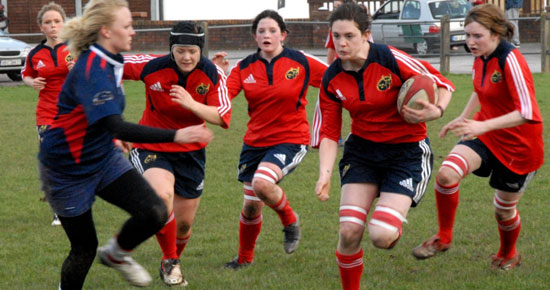 The Munster Under 18 girls started their third season brightly with an efficient and controlled win over touring Canadian side Thomas A Stewart from Ontario. The match, played in Ballincollig RFC, was an opener to a season that will see them play Connacht at home and away, and a Donegal County side.

All of the Munster scores came from the backs, but this was on the back of a massive forward battle between the sides, especially at ruck time. Number 8 and Captain Louise Fitzgerald, Gerda Coyne and Mary Rose Flanagan made numerous charges through the Canadian defences. Louise’s lineout throwing and the jumping of Gerda Coyne and Dannielle O’Riordan guaranteed excellent possession from the touch line.

Lightening winger Liz Burke opened the Munster account with a fine try when she took a pass from centre Léan McMorrow, who had weaved her way through a number of defenders. The conversion kick was missed.

Ten minutes later Munster stole possession from a Canadian lineout and fast ball from scrum-half Clare Merrigan was popped by out-half Mollie O’Donnell to first centre Rosie Lynch who cut a path through the visitors to score the first of her three tries on the day. Unfortunately the conversion points could not be added and the margin between the teams stood at 10 points.

The next Munster try came from a scrum in their own 22. Number 8 Louise Fitzgerald made a great run forward and took the ball into contact. Clare Merrigan fed Léan McMorrow, who went on a jinking run through the Canadian back line. Léan was tackled and the scrum-half was on hands to give a great pass to Rosie Lynch who crashed over the visitors’ line for an excellent try to the left of the posts.

A fine individual try came from Liz Burke when she caught a long range kick close to half-way. She used great speed and broke out of a tackle just inside the touch line to score in the corner. The conversion kick proved too difficult at that range, leaving the half-time score at 20 points to nil in favour of Munster.

The second half opened well for Munster with a great catch in the lineout by Dannielle O’Riordan. The Munster backs moved the ball quickly to Liz Burke, who sprinted from her own 22 to score her third try of the day. Liz then made way for the introduction of Marie Kelly at out-half, with Mollie O’Donnell switching to second centre and Léan McMorrow taking up position on the wing. Meg O’Regan gave way to Megan McCarthy at full back.

Some great interplay between the Munster forwards and backs soon resulted in another fine try by Rosie Lynch and this was converted by Marie Kelly. Soon after Léan McMorrow was rewarded for her contributions to so many tries when she scored one of her own 20 minutes into the second half.

The subs bench was used to introduce fresh legs and new energy and this was very effective in adding new life to the Munster game. Not long after her introduction winger Danni Delahunty claimed a spot on the score sheet with a fine try. So also did Mairead Comerford with about 10 minutes to play. Replacement out-half Marie Kelly scored an excellent try before adding the conversion points from her own kick. Danni Delahunty wrapped up the Munster win with the final try of the game, right on the full-time whistle, to leave the score at 59-0.

By agreement with the Canadians a squad of 26 players was used by Munster. There will be great competition for places following this top-class display. Eleven changes were made during the game and the quality and intensity of the Munster play did not diminish. Indeed, three players who were introduced in the second half scored four tries between them. Despite the selection headaches this will present for the coaches, this was the opener Munster really needed with enough possession to develop attacking play but also lots of really hard work to do in defence against a very physical side.

One observer after the game described the Munster players as a "class act". That assertion will be tested in their forthcoming games and will be earned, away from the crowds, in training.