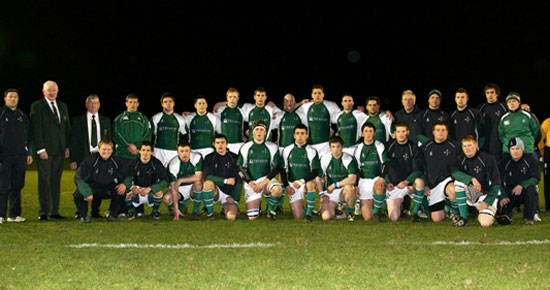 Irish Colleges had a well deserved victory against the Scottish Universities at the well manicured Lasswade rugby club grounds, Hawthornden, near Edinburgh. Irish Colleges team showed a level of maturity and great inspiration throughout the final game in the 4 nation series.

Irish Colleges first try was scored in the 10 minute by DCU’s Ben Reilly who received the ball after a great drive by Andrew Kerr.

Five minutes later Darragh Fanning abandoned caution embarking on a strong run from the 25 side-stepping three tackles in the process, to score under the posts.

Five minutes later Max Rantz Mc Donald in picking up the ball within his 10 mts, making the best of his running ability to score the try of the evening. Sean Tracy converted .In the dying minutes of the first half Scottish Colleges were awarded a penalty leaving the score at the interval 17pts to 3.

In the second half Irish Colleges soaked up persistent pressure from Scottish Universities who were awarded an early penalty, but eventually Colleges turned the game in their favour by scoring a series of magnificent tries by Darragh Fanning (2) with one converted by Sean Tracy, and MaxRantz Mc Donald, converted by substitute Peter Broughan close to the final whistle, Scottish Universities’ succeeded in scoring a try (Peter Saunders) leaving the final score 36-11 for Irish Colleges. The man of the match accolade went to Mark Hamilton from DIT.