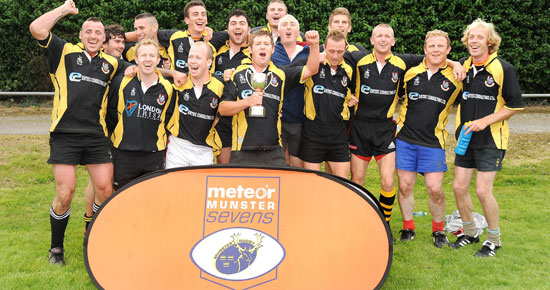 Thomond RFC were named the proud winners of the third annual Meteor Munster 7’s Senior Draw tournament on Saturday the 22nd of August, while Youghal brought home the Junior Cup.

This was the second year of ladies teams participating, which saw UL Bohemians overcome locals Ballincollig to take home the silverware in the senior final, but it wasn’t all bad news for Cork on the day with Youghal beating Waterpark in a superbly entertaining junior final, and Clonakilty taking home the Senior Bowl.

Without question the team on the day and the eventual Meteor Munster Sevens champions were Thomond RFC who beat another excellent Limerick side Bruff RFC. These two all Ireland division two sides overcame their AIL division one counterparts Garryowen RFC and Shannon RFC respectively in their semi finals.

The crowd was treated to more than seventy games this year taking place in Highfield RFC and Presentation Brothers College Cork training grounds – the biggest Meteor Munster Sevens Competition to date – with every county in the province represented with 13 of Munster’s top clubs, including AIB League champions Shannon and defending Meteor Munster Sevens champions Garryowen, 16 junior squads and seven ladies club teams taking to the pitches in their respective divisions.

In addition to the action packed match schedule, off pitch there was a host of family entertainment, including a bouncy castle and a sizzling BBQ all accompanied by a live DJ.

Commenting on the results of the day, John Lacey, Meteor Munster Sevens event co-ordinator said, “The Meteor Munster Sevens Tournament has been a huge success and we are delighted with such a fantastic turnout. There has been great interest from all the clubs, and club coaches in particular, who are using the event to kick off the season”.

Meteor’s Head of Communications, Amanda Carroll said, “Congratulations to the winners, and in fact all the teams who participated in the Meteor Munster 7’s tournament”.

“With more than a million customers nationwide, Meteor has a very strong presence in Munster. We are delighted to have teamed up with Munster Rugby in a tournament that involves so many talented players and teams in the province”, she added.

View some of the finalists in action here. Images © Sportsfile.

The event also supported the ‘Headsup’ text referral service from Rehab Care, which aims to help young adults in difficulty by offering support group information for a range of issues via text on 50424.

Club Season gets under way