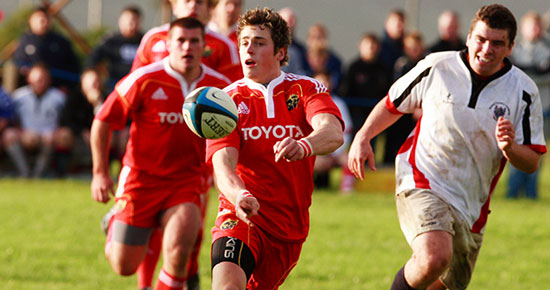 A Munster Rugby academy select headed for the Dingle peninsula yesterday evening to take on a Corca Dhuibhne President’s XV in celebration of the rugby club’s ten year anniversary.

The club is uniquely known for the fact that it is the only club in Munster in a gaeltacht area, and that it continues to prosper and develop the game of rugby in such a strong GAA foothold.

The Corca Dhuibhne President’s XV included players from the club itself and other Kerry clubs, with players representing Tralee, Killarney, Castleisland and Killorglin. Two academy players also featured for the side as Cathal Sheridan and Paul Rowley both claimed the half-back positions.

The academy selection was made up of players from the academy, sub academy and senior clubs.

The home side opened the scoring with a break from Paul Rowley resulting in a great pass out to the wing, and Rowley was on hand to convert leaving it 7-0 after 9mins.

Munster responded well with a break from hooker Mike Sherry, offloading to number 10 Declan Cusack who ran a great support line and stepped the final defender, going over unopposed, which he converted himself, and it was 7 a piece after 20 minutes.

Corca Dhuibhne continued to attack and rallied together for another score before the break with a well taken cross kick by Cathal Sheridan to find his winger charging over the line, bringing it to 12-7 at halftime.

However that was it for the Kerry side as Munster proved too strong in the second half. Nenagh’s Stephen Harvey brought the sides level on the return and Munster continued applying the pressure as they pulled away with a further 2 tries from Harvey, Cusack’s 2nd of the night, and 1 a piece from winger Finbarr Ahearne and replacement fullback Ronan O’Mahony. O’Mahony also features in tonight’s Munster Senior Squad against London Irish in Musgrave Park.

Academy Manager Ian Sherwin commenting on the game afterwards was “Delighted to be able to give the players a run out together, a chance to put into practice what they do every week on the training pitch.”
“It was great to be invited to Dingle to help celebrate the 10 year anniversary of the club and I think the game was a fitting tribute to the hard work and commitment carried out by all the club members, players and supporters here.”

“In particular I’d like to give mention to Danno O’Keeffe whose tireless work along with current President John Holstead and Michael Dooley has continued to drive rugby in such a strong GAA hold. Also I’d like to take this opportunity to thank them for their hospitality and to Danno for hosting the post match reception.”