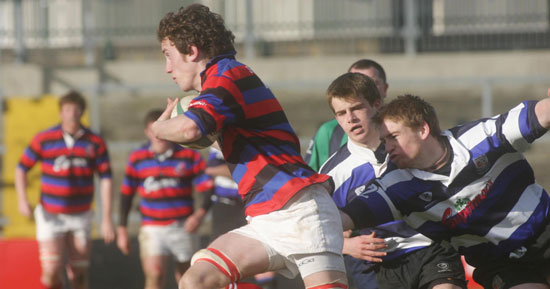 St. Munchin’s College have come through the second round quarter final qualifying stage of this year’s Avonmore Milk Munster Schools Junior Cup with a 17-10 over Christian Brothers College at Thomond Park today. The result sees the end of CBC’s Junior Cup campaign for another year as the defending champions bowed out with pride after a consolidated effort in the final stages brought them back into the game and set up an exciting climax. Having been defeated by the Cork side by just one point in last year’s final, it was a sweet victory for St. Munchin’s after last year’s disappointment. St. Munchin’s started brightly, crossing the line within five minutes of the start with a try from prop Cathal O’ Shea. Outhalf Eamonn Carr’s conversion gave the Limerick side a 7-0 lead in the early stages. This early score didn’t help CBC’s cause as the Limerick side settled early in the game. Eight minutes later, Carr was again on target with a well struck penalty to stretch their lead to 10-0, where the score remained going into the break. After the restart, another early St. Munchin’s try kept the Cork side on the back foot, with prop James McGovern touching down after 41 minutes. Eamonn Carr’s conversion made it 17-0, and CBC’s Junior Cup hopes seemed dashed going into the final stages. Having trailed for much of the game, two late tries from a very determined CBC brought them back into contention going into the final moments, setting up a nail biting finish. Tries from captain Darren Bowles and flanker Jack Daly bolstered the CBC side, and despite their best efforts in the dying minutes, CBC were unable to reduce the deficit any further.

St. Munchin’s College held on for the win, however, CBC showed great spirit by challenging right up to final whistle. St. Munchin’s College and will find out their next round opposition tomorrow afternoon when Ard Scoil Ris and Crescent College Comprehensive clash. The losers of this game will face St. Munchin’s College. As the premier under 15 schools competitions in the province, the Avonmore Milk Munster Schools Junior Cup competition continues with the revitalised format introduced last season, ensuring that the last eight schools in the competition will have at least two matches in three rounds of quarter finals, rather than a straight knock out.

*note- two games scheduled in Thomond Park- one on back pitch, one on main pitch

Weekend Results Round Up