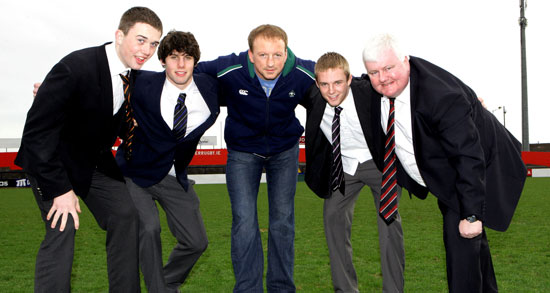 Current Cork-based members of the Irish Schoolboys Rugby Squad have lent their support to this year’s Six Nations U18 Festival which gets underway on March 26th as the tournament hosts Ireland face Wales at Musgrave Park (kick off at 7.30pm).

Cork city will play host to the festival which is proudly sponsored by The Bowen Group. The national U18 teams from England, Ireland, France, Italy, Scotland and Wales will play a series of matches at Musgrave Park, Cork Constitution FC, Mardyke (UCC) and Cork Institute of Technology (CIT) from March 26th until April 1st. Admission to all the matches is free.

Commenting on the festival, John R Bowen said "These players are the future of Six Nations rugby and we are delighted to be involved with this wonderful celebration of the best that U18 European rugby has to offer. With great venues for the games in a proud rugby city, as Cork is, the Six Nations U18 Festival promises to attract great support and to provide the launch pad for many a future star on the international rugby stage."

For festival schedule and other related news, go to www.irishrugby.ie/u18festival.