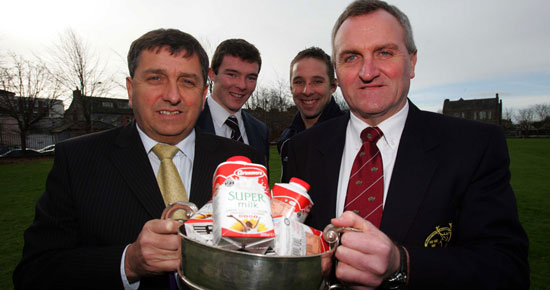 Arch rivals C.B.C. will meet P.B.C. on Wednesday 4th March in one semi final with Musgrave Park the probable venue and Rockwell will face St Munchin’s on the following day at a ground yet to be confirmed.

P.B.C. 15, Crescent College Comprehensive 0.
Presentation College advanced to the semi finals of the Avonmore Milk Schools Senior Cup with a rather lucky win over Crescent Comp in a very disappointing tie at Temple Hill.

For the most part of this game the Cork side were on the defensive but when scoring opportunities presented themselves the Pres’ boys took their chances.

It was Pres’ who had the early pressure and out half Kevin Kidney kicked them into the lead with a penalty after three minutes.

Pres’ were dominating the line outs where David O’Mahony and Bryan Carroll won plenty of possession while in the loose Jack Duffy put in a lot of work.

However it was Crescent’s out half Gareth Quin-McDonagh who controlled the game with some excellent kicking and creating several backline movements and only for some excellent tackling by the Pres’ defence the Limerick side would surly have booked their place in the last four.

On three occasions in the opening half J.J. O’Toole, Jurgen Quinlan and Daragh O’Doherty were all stopped short of the Pres’ line. Ben Sargent was off target with his two kickable penalties, one in each half.

The Cork side were lucky to be ahead 3-0 at half time and at the start of the second half the Limerick side continued to press home their territorial advantage.

They were rocked on their heels nine minutes into the second half when deep in his own half Kidney delayed his pass and when he did give the ball to Cian Bohane, the Center found a gap and raced seventy five meters to score and Kidney’s conversion just knocked the heart out of the Limerick side.

Crescent began to make silly mistakes and eventually Pres’ began to gain the upper hand and in the final minute in a sweeping backline move Johnny McCarthy touched down in the corner.

Glenstal Abbey School 17, Rockwell College 22.
Rockwell recovered from their defeat by Castletroy in the opening round to book a semi final place with a deserved victory over Glenstal at Clanwilliam Park.

It was the Murroe side who opened the scoring with a try from prop Paul Mullen after six minutes and Mike O’Flynn converted.

Rockwell hit back immediately and had the deficit down to two points when Gavin Ryan got in for a try. The Tipperary side hit the front with a try from winger Kenneth O’Dwyer when he touched down in the corner and Paul McEvoy converted.

McEvoy and O’Flynn exchanged penalties to leave Rock’ 15-10 ahead at half time.

A wonderful try by center Brian Smith mid way through the second half which McEvoy converted extended the Tipperary side’s lead.

Glenstal never gave up trying and were rewarded with a try in the final minutes by skipper Duncan Casey which O’Flynn converted.

The Corbally College raced into a 10-0 lead with a try from Ger Burke and a conversion and penalty from Michael Madden.

Jamie Gavin opened Ard Scoil Ris’s account with a penalty but this was cancelled out by another Madden penalty.

Darragh Turner added another try before Conor Kinnane and Evan Hogan extended Munchin’s lead with tries both of which Madden converted.

The losers never gave in and were rewarded with a try from Cian O’Shea.

Having received a lot of criticism after their defeat by St. Munchin’s in the opening round, the Cork College made sure second time out and had the game wrapped up by half time as they built up a 17-0 lead at the break.

Joe Holland put the visitors into the lead with a penalty after thirteen minutes. They followed this up with a try from Graham Mackesy in the corner minutes later and Holland expertly converted.

Ten minutes from half time Castletroy could see their crown slipping away, when Bryan O’Leary intercepted forty five metres out and raced away to score under the posts and Holland converted.

The holders came more into the game after the break but their only reward was a penalty from Darren Moroney early in the half.