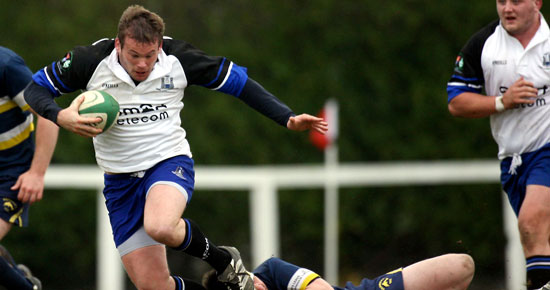 Cork Constitution topped the AIB League Division One with their win over Dolphin, while Garryowen and Shannon will face off in the semi finals after their wins on Saturday over UCD and Greystones respectively.

Shannon strode confidently into the Division One semi-finals as they relegated Greystones at Coonagh this afternoon.
‘Stones needed a shock final day win to stay in the top flight but Shannon, with a home semi-final draw in their sights, were in unforgiving mood.
The AIB Cup champions led 24-0 at half-time with Stephen Kelly (2) and Sean Cronin both touching down.
Further tries from Cronin and captain David Quinlan saw Shannon out of sight with Stuart Abbott grabbing a consolation score for ‘Stones.
Scorers:
Shannon: Tries: Sean Cronin 2, Sean Kelly 2, David Quinlan; Cons: David O’Donovan 5; Pen: David O’Donovan
Greystones: Try: Stuart Abbott