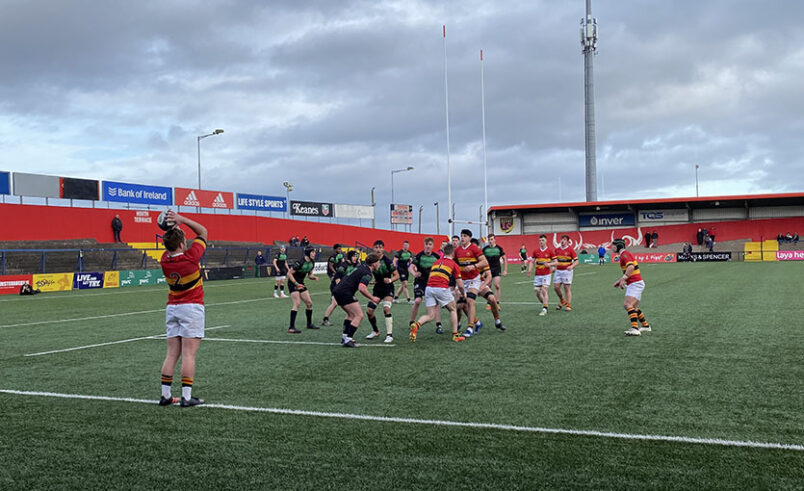 It was a busy day of action in the Munster Schools Junior Cup and the Pinergy Munster Schools Senior Cup with three games taking place on Wednesday across both competitions.

In the Junior Cup first round, Ardscoil Rís came from behind to earn a victory against Glenstal Abbey.

In the second round of the Pinergy Munster Schools Senior Cup, Christian Brothers College and Crescent College Comprehensive both secured their passage into the semi-finals thanks to victories over Bandon Grammar School and Presentation Brothers College, respectively.

Christian Brothers College are through to the semi-final of the Pinergy Munster Schools Senior Cup after an exciting 37-25 victory over Bandon Grammar School at Musgrave Park this afternoon.

However, just moments later a powerful carry from Peter O’Sullivan saw him score the first try of the game. Williams’ conversion saw the West Cork school go 7-0 in front.

CBC to their credit went back up the other end of the pitch and crossed for their opening try from Shane Maloney who collected a lovely floating pass from Matthew O’Callaghan in the build-up. Daire Burke’s conversion saw the team level 7-7 after 11 minutes.

Bandon regained the lead two minutes later through a Williams penalty but CBC responded through their powerful maul which saw Thomas Land cross for his side’s second try of the match. Burke’s excellent touchline conversion gave CBC a 14-10 lead.

Bandon responded once again with arguably the best try of the first half as Williams produced a sublime crossfield kick for Barry Spearman to collect with the winger doing well to cross in the corner despite the attention of two CBC tacklers. Williams missed the difficult conversion attempt.

With Bandon leading 15-14, they scored another try with half-time approaching when scrum-half Dylan O’Driscoll snuck over in the corner. The conversion attempt was unsuccessful so the West Cork side took a 20-14 lead.

On the stroke of half-time, CBC added three points through the boot of Burke to leave just three points between the sides at the break.

Just two minutes into the second half, CBC scored a try through Matthew O’Callaghan with Burke adding another tough conversion from the touchline.

With CBC now leading 24-20, they went further ahead when Kamis Novak crossed over from close range. Burke’s conversion saw CBC lead 31-20 with Bandon facing an uphill battle to get back into the game.

With 10 minutes remaining Bandon crossed for a try through Fionn O’Neill after a period of pressure in the CBC 22′. Williams’ conversion hit the post to leave six points between the sides.

In the final minutes of the game, Bandon desperately tried for another score but CBC extended their advantage with two penalties from Burke to see CBC safely into the semi-finals.

Bandon Grammar will have another chance and they will meet either Ardscoil Rís or Rockwell College who face off on Thursday.

Crescent College Comprehensive backed up their pre-Christmas form with a 17-13 victory over Presentation Brothers College in Round 2 of the Pinergy Munster Schools Senior Cup.

This victory sees the Limerick school go directly into the semi-finals.

In what was a tight contest, both sides exchanged penalties in the opening quarter. Ben O’Connor gave PBC an early 3-0 lead before Crescent responded themselves through the boot of Oscar Davey.

PBC then took to lead with a try from Danny Sheehan who scored off the back of a rolling maul. O’Connor added the extras to give PBC a 10-3 lead.

Crescent responded with a try from Mark Fitzgerald which was converted by Davey which left the sides evenly matched at 10-10 at half-time.

In the second half, O’Connor put PBC into the lead once again with a penalty before Crescent took the lead for the first time through a penalty try. With a 17-13 lead, Crescent held on for victory despite losing Werner Hoffman to a yellow card.

While Crescent look forward to a semi-final, PBC must play the winner of St. Munchin’s College or Castletroy College who meet on Friday.

Ardscoil Rís came from nine points behind to earn a Round 1 victory in the Munster Schools Junior Cup.

Glenstal took an early lead in this first round clash played on the 4G pitch at the University of Limerick as Sean McCormack crossed for the county Limerick school. Oliver Springett made no mistake with the conversion attempt to give Glenstal a 7-0 lead.

The score line remained unchanged for the rest of the first half and it was Ardscoil who struck first at the beginning of the second half with their first try of the game through Alex Fennell which went unconverted.

Glenstal extended their lead further through flanker McCormack and Springett was accurate with the conversion once again to give Glenstal a 14-5 lead.

The Limerick City school then took the lead for the first time in the game when Butler crossed for his own try which he himself converted. Butler then added a penalty to see his side into the second round where they will meet St Munchin’s College.