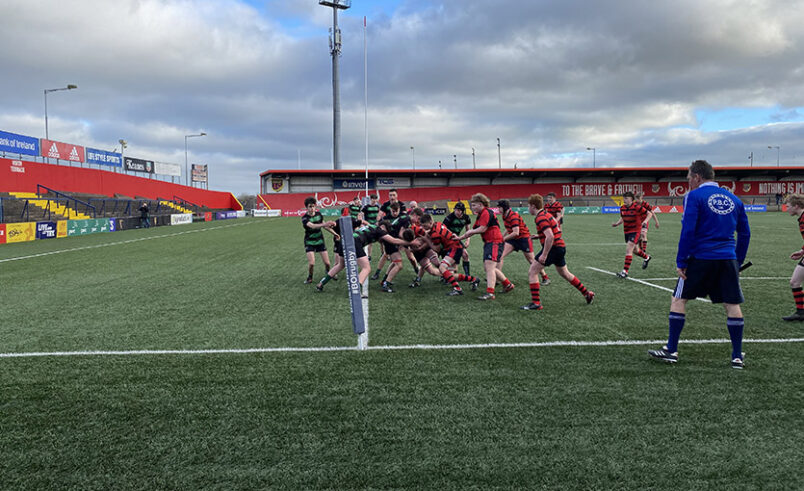 There was late drama in the Pinergy Munster Schools Senior Cup this afternoon as Ardscoil snatched a draw at the death to ensure a replay against Rockwell College next week.

Meanwhile, in the Munster Schools Junior Cup, Bandon Grammar School progressed to the second round after a victory over High School CBS Clonmel in Musgrave Park.

Ardscoil Rís live to fight another day as a last gasp converted try earned the Limerick school a replay against Rockwell College this afternoon.

Ardscoil took a 3-0 lead through a Harry Long penalty before he and his centre partner Paddy Hassett combined in midfield as Long touched down for the first try of the game which he converted.

With a 10-0 lead, Ardscoil went further ahead when Evin Crowe scored an intercept try which Long converted. Just before halftime Rockwell out-half Peter McGarry chipped over the top of the Ardscoil defence to collect and score his side’s first try of the afternoon.

In the second half, Rockwell closed the gap when Joe Lawrence touched down for a try which was converted by McGarry. The out-half added a penalty soon after to tie the game.

With just a minute remaining, Rockwell went ahead when Brian Gleeson crashed over. McGarry’s conversion looked to have secured a seven point margin of victory.

However, Ardscoil went back up the other end and scored through Joe Costelloe which was converted by Hassett.

The two sides will meet again next week to determine who plays Bandon Grammar School in the Pinergy Munster Senior Schools quarter-final.

Bandon Grammar School have advanced to the second round of the Munster Schools Junior Cup after recording a 41-10 victory over High School CBS Clonmel this afternoon at Musgrave Park.

High School faced an uphill battle early on when they were temporarily reduced to 14 men when tighthead Tom O’Brien was sent to the sinbin.

Bandon made the early numerical advantage count as Darragh Walsh crossed for the opening try of the game which Rory Golden converted. The score came off the back of a Clonmel mistake as they overthrew a lineout close to their own line.

Walsh made it a brace of tries after 15 minutes when he slalomed his way through the Clonmel defence to touch down again in the same corner. However, this time the conversion was missed by Golden.

That 12-0 lead was soon extended to 19-0 when Cash Healy crashed over from close range. Golden made no mistake with the conversion.

Despite the deficit, Clonmel continued to battle bravely as they disrupted Bandon breakdowns and put in some strong defensive sets.

The Tipperary side received a lifeline in the final few minutes of the first half when Bandon number eight Max McQuiston received a red card.

With a man up, Clonmel pushed for a much needed try before the half-time break but they were denied by some good Bandon defending.

Not long into the second half, Golden got over for a try which he converted to give the West Cork school a 26-0 lead.

In the final 10 minutes of the game, Clonmel began to apply the pressure and their patience was rewarded when Billy Tierney crossed for his side’s opening try which went unconverted.

With five minutes remaining, Bandon added another score when hooker Marcus Kelly crossed in the corner which came off the back of some excellent handling from the West Cork side.

As they did throughout the 60 minutes, Clonmel continued to battle before Luke Slattery crossed for his side’s second try in the dying moments of the game.

Bandon Grammar will now meet Rockwell College in the next round.

Please note there is a limited capacity at the back-pitch of Thomond Park. While passes are distributed across both schools, there are a limited number of general ticket sales available at the gate. We would advise all patrons to arrive early.