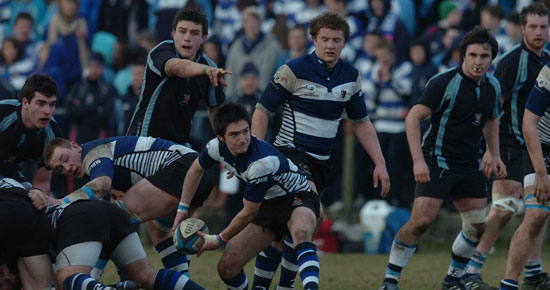 Rockwell College qualified for the final of the Munster schools senior cup in the most dramatic manner possible at Clanwilliam last Wednesday.

With the last kick of the game, and eleven minutes into stoppage time JJ Hanrahan dropped a goal that broke the hearts of a Castletroy side who must have thought they had done enough to win when outhalf Padraig Quinn got in for the only try of the game and fullback Padraig O’Connor landed the conversion from six metres in from the touchline.three minutes from the end of normal time.

The biggest delay in the second half came when referee Dermot Moloney suffered a calf strain and had to be replaced by Olly Hodges.

In what was a superb contest all through with some amazing big hits from both sides a draw might have been a more equitable outcome.

Castletroy got off to the best start possible when Padraig O’Connor landed a penalty after onlyt five minutes when Roxckwell were penalized for playing the ball on the ground.
Six minutes later JJ Hanrahan had Rockwell level from almost in front of the posts after being off target three minutes later from out near the touchline.

It remained 3-3 to the interval but two penalties by Hanrahan meant that Castletroy had to find a way through for a try. They finally did so when after several forwards tried to barge over the ball wads finally moved wide to outhalf Quinn who wriggled in for the try which O’Connor converted.

But Rockwell sealed it with Hanrahan’s drop goal and there was no time even to restart the game.
Rockwell had their man of the match in Hanrahan but he was closely followed by an outstanding number 8, Luke Cahill who was given great support in a strong forward unit by Shane Buckley and Stephen Maguire.
Castletroy will regret not taking a kick for goal a minute into the second half but opted to kick to touch and this may have cost them dearly. They had an outstanding performer in James Rael ably assisted in the pack by David O’Brien and Michael Dooley.

Outhalf Padraig Quinn also did well in a side that was dejected at the final whistle.