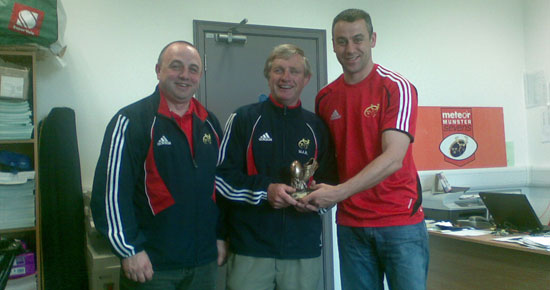 Munster Rugby is delighted to congratulate Noel Sexton (Wiry) on winning the final Right Price Tiles Volunteer of the Month award for the 2008/09 season.

Noel’s rugby involvement began as a first year pupil in Crescent College. He represented his alma mater with distinction in both the Munster Schools Junior and Senior Cups, though he never had the good fortune of winning either.

On leaving school, Noel joined Old Crescent Rugby Football Club and thus began a long and distinguished playing career. Noel played with the Under 20’s, Thirds, Seconds and eventually made his way onto the Senior Team in the number nine jersey, though he has been known to play in other positions most notably on the wing.

Noel’s first term as Captain of the senior team was in the 1972/73 season and he led the Club on a very successful tour to San Francisco. He again captained the senior team in the 1976/77 season and led the Club on another overseas tour, this time to Cornwall. During his long playing career Noel was as he would say, lucky enough to win the Charity Cup in 1977 and two Munster Second’s Senior League Medals in the early 80’s.

With his playing career coming to an end Noel turned his attention to refereeing. He joined the Munster Association of Referees in 1982 and is still an active referee today. He has refereed at the highest levels, Munster Junior and Senior Cups, all divisions of the All Ireland League, Junior Interprovincial and Schools Internationals to name but a few. However, it’s as an administrator that Noel excelled.

Noel became Treasurer of the Association in 1993, a position he currently still holds. In the nineties he took on the time consuming position of Fixtures Secretary of the North Munster Section of the Association which again is a position he still holds today. As fixtures secretary, Noel could make anywhere up to 150 calls in a week especially when bad weather intervenes. Noel couldn’t do this work on his own and the Munster Association of Referees is deeply indebted for the tremendous help he receives from his wife Lena and indeed his daughters Emily and Harriet.

Somehow Noel still manages to find time for his other sporting passion which is golf and he is a very active member of Limerick Golf Club. Noel also still finds time to help his club Old Crescent in various volunteer roles.

Noel holds the distinction of gracing the halloed turf of Thomond Park first as a player and then as a Referee through six decades from 1959 until the 2000’s which by any standards is an incredible achievement. He is a most deserving winner of our Volunteer Award.

Noel is the sixth and final winner of this seasons Right Price Tiles Volunteer Recognition Programme which was launched to give clubs and schools the opportunity to acknowledge the significant contribution made by individuals and groups who have developed, promoted and/or advanced the sport of Rugby in the local community and in the province.

Through the Volunteer Recognition Programme, Munster Rugby would like to acknowledge and reward these individuals who devote countless hours’ week in week out, year after year to provide a safe and enjoyable environment at the grassroots of the game.