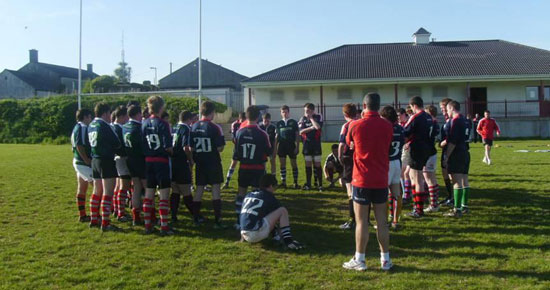 The summer training sessions are in line with the IRFU National Training programme and the long term player development programme.

Both the domestic game and the academy department recently carried out player screening sessions where players were nominated to attend by clubs and schools throughout the province.

The age grades in attendance varied from sixteen to nineteen years in an effort to identify and nurture future talent within Munster. As ever with the professional side right down to the domestic game Munster’s prerogative is to identify and recruit players from within the provincial set-up. The academy recognises that this identification process needs to commence as early as possible for player development.

Four screening sessions took place in the last few weeks between two centres in Charleville and Fermoy. Each session held between 45 and 60 young players with over 200 in attendance altogether. The sessions were fully resourced with the full backing and support of the Munster Rugby Domestic Game department and the Munster Rugby Academy.

As a result of these four screening sessions 85 players will be selected in the coming weeks representing the various age grades. These players will then participate in the summer training programme rolled out by the Academy. The training will commence on the 6th of July and run for 8 weeks.

Academy manager Ian Sherwin commented "we are working closely with the domestic game department in implementing professional structures in the early identification of talented players. We plan to identify high performance players at a younger age so that they can be monitored and developed within a professional set-up. We would always be hopeful that players not involved would continue to work within their own clubs and schools so that we don’t miss out any late developers."

Munster Rugby would like to thank Fermoy RFC and Charleville RFC for the use of their facilities.