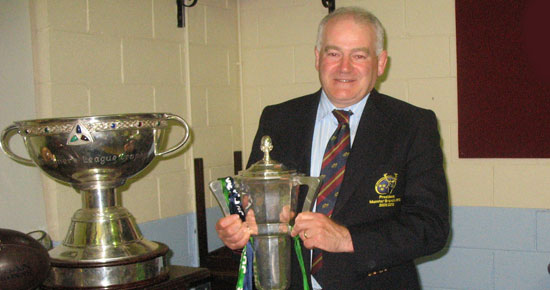 Declan Madden became the nineteenth person from Garryowen to be honoured with the Presidency of the Munster Branch, when he took over the office at last night’s AGM which was held in the Garryowen clubhouse in Dooradoyle.

Declan takes over the reigns from outgoing president Nicholas Comyn. He was born in Rathkeale in 1956 and began his rugby career at St. Munchin’s College before becoming a member of Garryowen in 1973 where he progressed through the ranks and made his Senior debut in 1976 and served the club as a player for twenty years.

During this time he was part of Garryowen sides that won Under 20, Gleeson League, Seconds League, Munster Junior Cup, Munster Senior Cup and All Ireland League, thus becoming the first Munster president to hold an AIL medal.

On his retirement from playing he became active in coaching as well as serving the club as secretary and treasurer and was chairman of rugby for six years including the 2006/07 season when the club achieved the grand slam.

He is presently employed by Bank of Ireland where he is the Manager of their Branch at 94 O’Connell St, Limerick. He is married to Ger and they have two grown up children.

Munster Rugby would like to acknowledge all the work carried out by outgoing President Nicholas Comyn throughout the 08/09 season and thank him for his service to Munster Rugby. We would also like to wish Delcan all the best in his new role as Munster Branch President over the coming season and look forward to working with him.