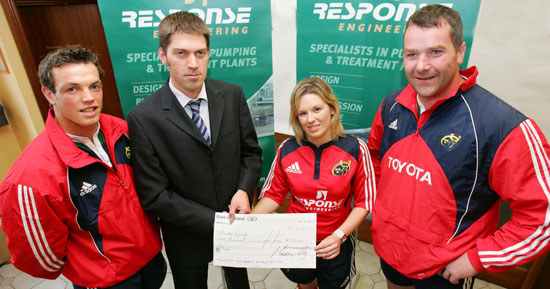 Charleville based water and waste water treatment specialists, Response Engineering Group have given Women’s Rugby in the province a timely boost with the announcement of their sponsorship of the Munster Senior Women’s team for the 2007/8 season in Charleville on Tuesday.

At the announcement today were members of the Munster Women’s squad including Amanda Greensmith, Marie Barrett and Aoife Mahony, while Munster stars Anthony Foley and Ian Dowling were also on hand to show their support for their female counterparts.

Speaking at the announcement of the sponsorship deal, Response Engineering Group Director Sean Murphy said "Munster are the current inter-provincial champions and we hope that our involvement will help them retain the coveted title in the 2007/8 season.  We see our support for the team as a perfect fit for Response, as both groups’ strive for excellence, one on the field of play and the other in the field of business."  He added that they see women’s rugby as an emerging force in Irish Sport, increasing in popularity all the time- particularly since the performance of the Irish women’s team in the World Cup in Canada last year where the Irish team finished in the top eight teams in the world.

The Response Group is one of the foremost Irish concerns engaged in the designing, building and operating of Water and Wastewater Treatment Plants and recently acquired the Carlow based CSL, which specialises in utility operations and maintenance in the water and waste water treatment sector.

The Munster women’s team has been the dominant force in inter-provincial rugby over the last decade, winning all but one of their inter-provincial campaigns.  Of the twenty six strong World Cup squad of 2006, eleven of those were from Munster, and nine of those players are currently training with the Munster Women’s squad.

Under the new coaching partnership of Donal O’Driscoll (Ballincollig) and Fiona Steed (Ireland’s most capped female player), the Munster Women’s team have been back at training since late July, with a training squad of 34 currently being put through their paces at Fermoy RFC’s excellent facilities.  These 34 were chosen from two open sessions, with eight Munster clubs now represented, including Clonmel, Shannon, Waterpark, U.L. Bohemians, Nenagh Ormond, Clonakilty, Highfield and Clanwilliam.

Included in the training squad is last year’s Munster Women’s Player of the Year Paula O’Connor, as well as nineteen year old Nicole Fitzgerald who picked up her first Irish cap at the Six Nations earlier this year.  The side also includes two inter-county footballers- Niamh Briggs (Waterford) and Mairead Kelly (Cork).