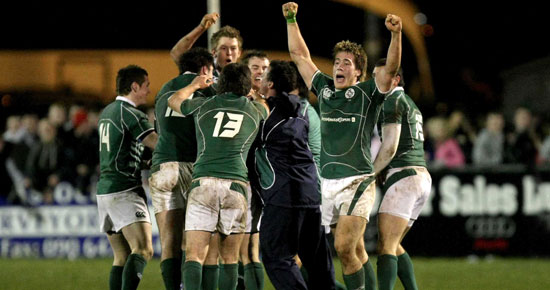 The senior Ireland XV are not the only side contending for Grand Slam honours as the Ireland U20’s side still remain in contention with a last gasp win over England on Friday evening in Athlone.

The Irish U20’s continue on winning ways with a 19-18 win over England at the weekend. In dramatic fashion outhalf Ian Madigan stole the lead with a 45m drop goal well into injury time.

The win puts Ireland in pole position as the only side to win three out of three at this stage of the U20’s Six Nations. In the other fixtures Scotland beat Italy 14-10 and France defeated Wales on a 40-20 scoreline.

The Ireland club XV fought back for a 13-13 draw on Friday evening as they led 10-3 going into the break, but a strong attack from England in the second half left it 13-10 running into the final minutes.

Dolphin outhalf Barry Keeshan slotted over a penalty with three minutes to go which led to Ireland’s share of the spoils.

Fellow Dolphin man Barry O’Mahony secured the man of the match award after scoring Ireland’s try in the first half.

The Ireland Club XV will go on to play Scotland on Friday the 13th of March in Watsonian Rugby Club, Edinburgh, ko 7.30pm.

It was a game of two halves for the Irish women as they led 13-5 at the break, but England responded with a four try haul in the second half to win 29-13.

It still remains a very tight 6 Nations Championship with four sides on equal points and Irish Captain Joy Neville is still hopeful of securing their best ever Six Nation’s finish.

Up next is Scotland in Edinburgh on Friday March 13th and then Wales on Saturday March 21st in Cardiff.