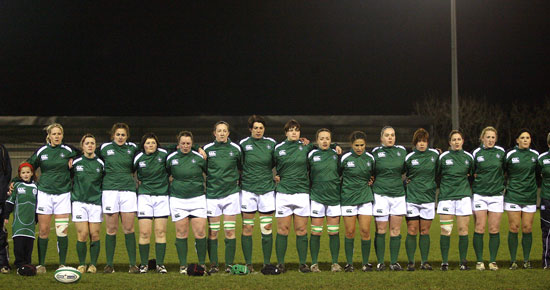 Rarely will an Ireland and England Women’s clash be more eagerly anticipated than Friday night’s home-tie in Dublin.

England travel to Ireland on the back of a shock one-point defeat against Wales in the last round, a result that ended their hopes of a fourth consecutive grand slam, while Ireland come into the game trying to keep their unbeaten run intact following wins over France and Italy.

Should Wales beat France in their third-round clash this weekend, then they will be overwhelming favourites to snatch the title from England’s grasp, but that knowledge will no doubt hugely motivate Ireland’s opposition on Friday.

England, who will host the Women’s World Cup in London next year, are determined to make up for their surprise loss to Wales with a convincing win in Dublin and in that mindset they will present a more dangerous threat than usual.

While Ireland have never beaten England, they came extremely close when the two sides last met in December. The Irish lost 19-8 despite having led for most of the game but the game will have taught Ireland a valuable lesson about closing out matches from leading positions.

Ireland head coach Steven Hennessy said his charges will have to put in a huge effort if they are to get a first ever win against the English.

"We can take a lot of positives from the season so far and I have been very pleased with how we have finished games. We scored late against France and we scored three late tries in the game against Italy after getting off to a tough start. They key message for the England game though will be that we’ve got to play for 80 minutes and defend better because if we don’t England are good enough to cut us open."

Against Wales last week, England made some crucial errors, mainly in turning down a number of kickable penalty opportunities and failing to defend well against searing breaks from the likes of Wales skipper and number 8 Mel Berry. They will have learned from those mistakes and Ireland will have to be at their best defensively to be in with a chance.

England undoubtedly offer a potent attacking threat and out wide they have high quality finishers in the likes of Richmond’s Fiona Pocock and the elusive young Emily Scarratt from Lichfield in the centre but Ireland will have to get to grips with their opponents up front to stand a chance.

Irish women’s rugby however is on a high following a first ever win over France and a five-try away victory over Italy in recent weeks and England are vulnerable this season without the presence of a number of key players who are preparing for the IRB Rugby World Cup 7s in Dubai next week. Ireland’s squad is packed with experience and players like captain Joy Neville, lock and backrow Orla Brennan and vice captains Fiona Coghlan and Lynne Cantwell have faced England often enough to know exactly what to expect.

While they will know that England are looking to secure a strong victory to make up for their loss last week, they will also know that if they play at their best they are in with a shout to secure what would be a sensational victory against the current champions.