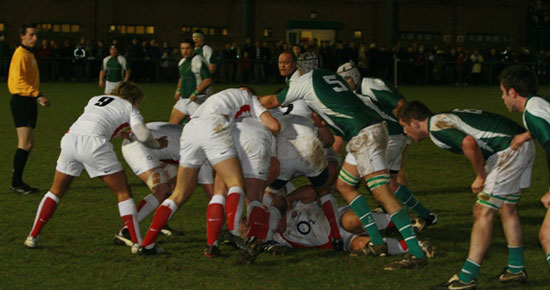 City of Derry Rugby Club was the venue for its first International when the Irish Colleges side took on the England Students before a large crowd on Friday evening.

England Student full-back Grant Pointer broke Irish hearts with an injury time try to give the travelling Students a scarcely deserved victory over a battling Irish Colleges side at City of Derry’s Judges Road on Friday night.

The young Irish side had looked set for a famous victory after Old Belvedere out-half Brian Collins 67th minute penalty put them a point clear but England’s strong late surge saw the home side caught short on the left wing where Pointer galloped in.

It was a cruel end for a young Irish side which had put up a determined display in what was the first ever international match to be staged at the North West venue.

The omens didn’t look good for the home side when Pointer’s third minute penalty gave the visitors an early lead, the full-back punishing some loose play by the Irish pack with a precise kick.

Ireland rallied though and began to push the England side back with some clever inter-play and precise kicking which presented Collins with a drop-goal opportunity but his 5th minute effort fell agonisingly short of the posts.

Home frustration was short-lived however when only two minutes later Athlone IT’s Paul Harte broke through several England tackles to run home a superb individual try which Collins converted for a 7-3 lead.

Again England looked to the boot of Pointer for a response but on 22 minutes the English place-kicker’s penalty came back off the upright to preserve Ireland’s four point advantage.

The visitors had the home side pinned back in their own 22 but a succession of excellent Irish tackles saw the four point margin maintained until the interval in the face of some strong English pressure.

Missed Chances
Ireland made one change at half-time, St. Mary’s Rob Sweeney replacing prop Mark Hamilton but it was the English, with Toby Henry and Tom Malaney on for Rob Springhall and Andy Bridgemen, who started the better.

However a great turnover from Ireland prop Mike Storey gained the home side momentum. With England on the backfoot, indiscipline in their back line presented Collins with a very kickable penalty on 48minutes but unfortunately the out-half dragged his effort wide of the left hand post.

Six minutes later and from another penalty, Collins aim was better but once again his luck was out when his 40m kick dropped under the cross-bar.

Those misses looked costly as England made the most of a numerical advantage on their left flank to send winger Drew Locke crashing over in the corner for a well-worked try. With Pointer missing the subsequent conversion, England looked set at 8-7 ahead to go on and dominate proceedings.

Ireland however refused to buckle and after Collins penalty restored their lead, some heroic defending kept wave after wave of English attack at bay.

The home side were dealt a blow though on 75minutes when home favourite and City of Derry captain David Houston was harshly sin-binned for deliberating stopping play, leaving Ireland to play the remainder of the game with 14 men.

Some desperate tackling coupled with a huge effort from the Irish pack looked to be enough to hold off the English until, in the 82nd minute, play was quickly switched to the left flank were England took full advantage of an overlap for Pointer’s vital try which the full-back was unable to convert.