New Recruits for the Academy. 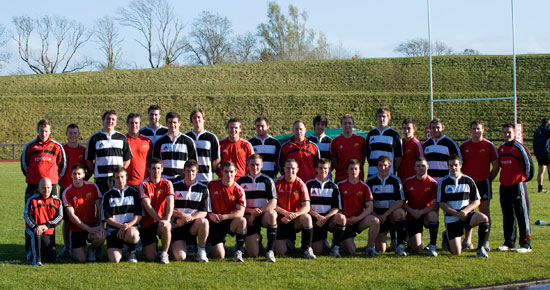 It is that time of year again with squad players coming and going, not only at senior level, but within the Academy ranks also.

The Academy welcomes three new players this season with Danny Barnes, Pa O’Regan and Mike Sherry all advancing from the sub-academy structure.

Making way are academy players Dave Ryan and Tommy O’Donnell, as they both receive development contracts with the senior squad, and players Evan Ryan, Murray Kinsella and Dave Sherry have come to the end of their Academy contracts.

For the 09/10 season the Academy will work with a group of thirteen players. Centre Danny Barnes and tighthead prop Pa O’Regan both hail from Tralee where they started their trade with Tralee RFC. Barnes played Division 2 rugby with UCC last season while Pa O’Regan lined out with UL Bohemians. Garryowen man and hooker Mike Sherry comes into the academy as brother Dave moves on.

We catch up with Academy manager Ian Sherwin below:

Is it a concern that so few players are coming into the Academy this year?
No not at all, we tend to focus on quality over quantity and we pick players according to the specific needs of the professional game in terms of succession, for example when there is a shortage of players in a specific position we focus our recruitment efforts on filling that position. We believe in working with a core group of elite players that we can work closely with. These things also work in cycles and last year we recruited seven players to make up a group of 15 participants and this year we will have 13.

The academy is showing the benefits once again with two players receiving senior call-ups?
Yes it is essential we keep developing players and ultimately feeding them into the professional set-up. It’s great to see Dave and Tommy break into the senior ranks and they now have the basic foundations to make the transition into professional rugby.

Overall it was a good year for the Academy?
Well this year especially highlighted the cause of development players with the All Blacks game, and that provided a huge boost and source of motivation to any up and coming players. The likes of previous academy players Billy Holland and Timmy Ryan rising to such an occasion really cemented the need for investment in grass-roots rugby in Munster. We had three Academy players, Andrew Burke, Conor Murray and Dave Ryan all called into Magners League squads at the end of the season.

Players must be excited with the introduction of the British and Irish Cup?
The A games give academy players the chance to play alongside development and fully contracted players which provides a good balance of experience and youth. A new "A" League competition will enhance the academy and professional team integration within a competitive structure. The new cup will provide academy players another opportunity to impress the senior team coaches.